Magna International (TSX:MG)(NYSE:MGA) is the largest automotive supplier in North America and is a global leader. It has about 338 manufacturing operations and 89 product development, engineering, and sales centres in 28 countries.

MG stock has been consolidating since late 2018. So, it can be a good time to buy some shares.

Recently, automakers Ford and Chrysler recognized Magna’s excellence by giving it awards for being a top-performing global supplier and naming Magna its 2018 interior supplier of the year, respectively.

An overview of Magna’s recent results

The sales decline was better than the 5% decline in global light vehicle production in the period. Magna explained that “excluding the impact of foreign currency translation and divestitures net of acquisitions, sales increased 4% and by segment: Complete Vehicles increased 36%, Seating increased 3%, Power & Vision was unchanged, and Body Exteriors & Structures decreased 4%.”

How the business fared in the last recession

Magna’s earnings plunged in 2008 and 2009, leading up to its slashing of the dividend in 2009 by 84%. However, it also made a strong comeback very quickly; by 2010, not only did its earnings per share more than recover to pre-recession levels, but its dividend per share also almost recovered to pre-cut levels.

Since 2011, Magna’s dividend has increased at a compound annual growth rate of 20% per year!

Currently, its dividend yield of 2.9% is relatively high compared to its historical levels, which indicates the stock may be undervalued. 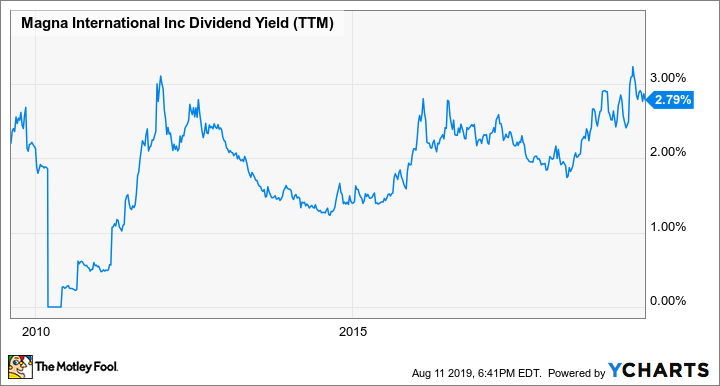 Magna tends to buy back shares, which is good when the stock is undervalued. Since 2012, it has reduced its share count by 26%. Most recently, the company made good use of capital by buying back US$693 million worth of shares at US$48.80 per share.

At Magna’s recent quotation of US$49.80 per share, it trades at about eight times earnings, which is relatively cheap. The stock trades at a discount of roughly 20% from its long-term normal multiple of 9.8.

Magna has been reinvesting about half of its operating cash flow back into the business, including in areas of electrification and autonomous driving. Moreover, the company recently began building a manufacturing plant in Ohio and signed its first complete vehicle manufacturing joint venture in China. These are a glimpse of Magna’s exciting future.

Magna also has strong free cash flow coverage for its dividend. Nevertheless, in a recessionary scenario, its earnings and cash flow can fall off a cliff very dramatically and result in a dividend cut. At times like that, investors must remember that it is a leader in its space and be confident to back up the truck.

Fool contributor Kay Ng has no position in any of the stocks mentioned. David Gardner owns shares of Ford. Magna is a recommendation of Stock Advisor Canada.