Is your stock portfolio ready for a recession? If not, consider recession-ready stocks like Enbridge (TSX:ENB)(NYSE:ENB) and Fairfax Financial Holdings (TSX:FFH) right now!

Enbridge is a leading energy infrastructure company in North America. It’s a key component of the energy sector, as it moves about 25% of the crude oil and about 22% of the natural gas on the continent. It’s also the third-largest North American natural gas utility by consumer count.

Throughout the financial crisis of 2007/2008 (which triggered a recession) and the energy price collapse five years later, Enbridge’s adjusted EBITDA, a cash flow proxy, remained stable or growing. This is evidence that the business’s virtually regulated or contracted EBITDA is recession resilient.

As a result, Enbridge is a top Canadian dividend stock that has paid a reliably growing dividend for 23 consecutive years with a 10-year dividend growth rate of 15%.

What’s exciting for buyers today is that Enbridge offers a yield of 6.3%, which is the highest it has been in 20 years! Other than its dividend increases, its lower share price is another contributor to its enticing yield. 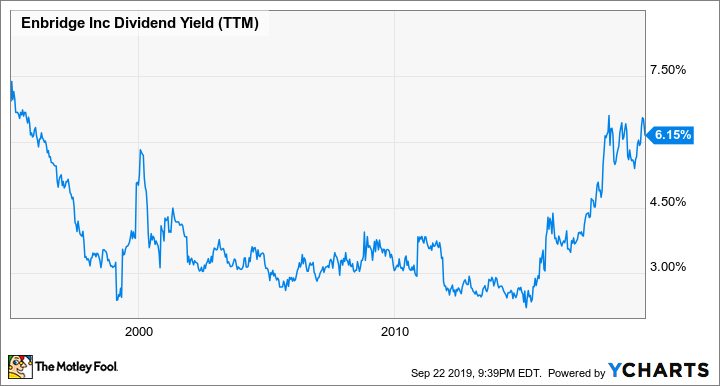 In the first half of the year, Enbridge’s payout ratio was less than 63% of its distributable cash flow, which aligns with the company’s target of less than 65%. Therefore, its dividend is safe. Next year, it intends to increase the dividend by 10%. This implies an unbelievable forward yield of 6.9% from a blue-chip dividend stock!

While the stock market has been marching to new heights, Fairfax stock has been treading near its multi-year low. It’s also trading near a 10-year low price-to-book valuation, as shown in the chart below. Therefore, it’s an incredible opportunity to accumulate FFH shares right now. 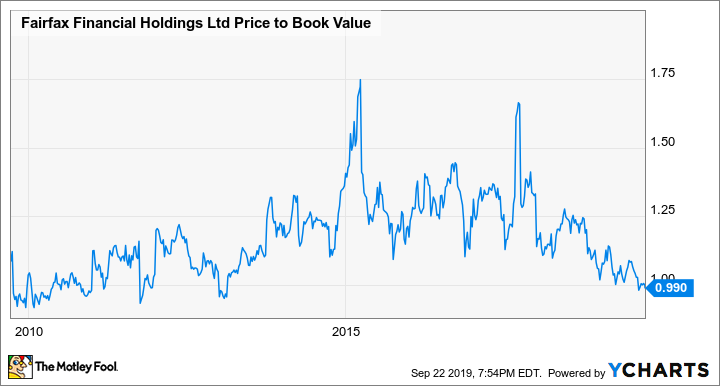 The stock also offers pays a dividend once a year to help boost returns. It’s good for a yield of 2.1% currently.

In the first half of the year, Fairfax’s overall insurance operations were profitable. Its underlying insurance and reinsurance businesses operate on a decentralized basis, allowing Fairfax to solely focus its efforts on capital allocation.

Consequently, from 1985 to 2018, led by Prem Watsa, Fairfax compounded its book value per share compounded by 18.7% annually, which translated to the share price growing by almost 185 fold, equating to 17.1% per year!

At the end of the first half of the year, Fairfax had more than US$10 billion of cash and short-term investments in its investment portfolio. Additionally, Fairfax generates float from the premiums received because losses are paid often years later. In between the time premiums are received and losses are paid out, Fairfax invests the float with the goal of generating lucrative returns in the markets.

The low-cost float and large cash position give lots of liquidity for Fairfax to take advantage of any future downturns in the markets.