Market crashes are no joke. In the last crash, triggered by a recession due to a financial crisis, the stock market collapsed by about 50%. However, these market downturns are also rare opportunities for investors to make a fortune!

Here are two best-in-class stocks from which you can make tonnes of money by buying in a market downturn! They turned into super growth stocks in the years following the last market crash in 2008/2009, and I believe they can do the same after future market downturns.

In the last market crash, Canadian National Railway (TSX:CNR)(NYSE:CNI) stock fell about 30% from peak to trough, which is not bad compared to the drop in the market.

Since the trough in March 2009, the quality industrial stock has delivered total returns of about 512%, which equates to 18.6% per year! Over the decade, it has increased the dividend by nearly 15% per year, as the company nearly tripled its earnings per share and expanded its payout ratio from about 25% to 35%.

CN Rail is the backbone of the North American economy, and its network is unparalleled — connecting the three coasts of the Atlantic, the Pacific, and the Gulf of Mexico.

The leading railroad company transports a variety of products such as petroleum and chemicals, grain and fertilizers, and forest products, which make up approximately 20%, 16%, and 13%, respectively, of its revenues.

Additionally, CN’s intermodal business contributes to about a quarter of its revenues. The service allows its customers to reduce costs and be environmentally friendly, as it is four times more fuel efficient than trucking alone. 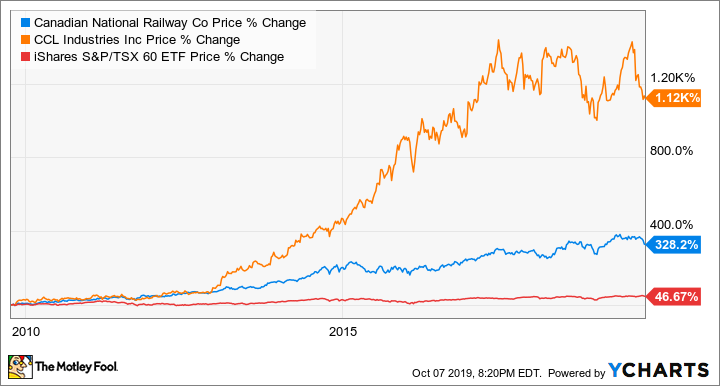 CCL Industries (TSX:CCL.B) is another quality industrial stock to consider buying in a market downturn. The last market crash evaporated more than 50% of CCL Industries stock’s value from peak to trough.

However, since the trough in February 2009, the stock has delivered total returns of about 1,226%, which equates to 27.4% per year! Over the decade, it has increased the dividend by more than 16% per year, as the company’s earnings per share are five times what they were. Interestingly, because of the strong rise in earnings, CCL’s payout ratio actually declined from 34% to 24%.

CCL Industries manufactures and sells packaging products, including labels and containers, including aluminum aerosols. It has more than 165 production facilities in 40 countries, supplying labels or containers to the home and personal care, healthcare, and food and beverage industries.

The company had made acquisitions, which expanded its offerings. For example, CCL Checkpoint is a technology-driven loss prevention and inventory management labeling solutions for the retail and apparel industry, while Innovia makes polymer banknotes and uses similar technologies for other label, packaging, and security applications.

Industrial companies follow the ebb and flow of the economic cycle. Therefore, if your goal is outsized returns, you should invest a substantial portion of your money in quality industrial stocks, such as CN Rail and CCL Industries, during market crashes to take advantage of the subsequent, inevitable recovery of the economy.

Canadians aged 18 years and older are fortunate to have access to the tax-friendly Tax-Free Savings Account (TFSA). The versatile…