Rogers Communications (TSX:RCI.B)(NYSE:RCI) was the first of the Big Three telecoms to report its third-quarter results. It wasn’t pretty, as investors ran for the hills and dragged the stock down more than 8%. This had a ripple effect on BCE (TSX:BCE)(NYSE:BCE) and TELUS (TSX:T)(NYSE:TU) stocks that dropped 4.4% on the day.

Rogers’s results over the past three quarters give a clearer view of the bigger picture. Its revenue declined by 0.3% to $11.12 billion against the same period a year ago. Service revenue increased by 0.2% to $9.72 billion. Adjusted EBITDA climbed 4.9% to $4.68 billion. Adjusted earnings per share fell 1.9% to $3.15.

Last quarter, Rogers introduced the unlimited data plan, for which consumers would pay $75 per month for 10 GB of maximum speed data and slower speed thereafter with no overage fees. The reduction in overage fees will be a dampener on revenue and earnings growth over the next few quarters. Since Bell and TELUS followed suit soon after with similar plans, they should also experience similar dampening on their profitability. 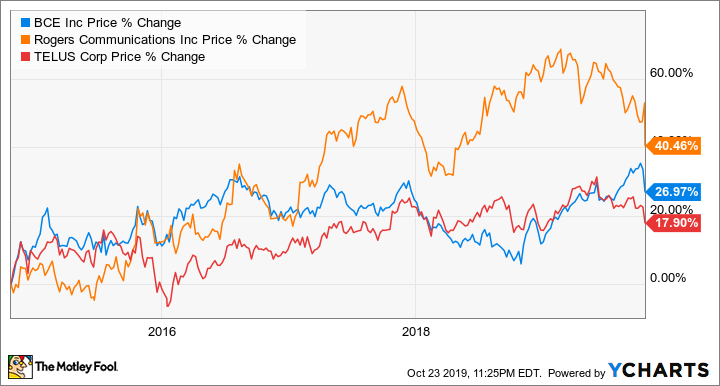 BCE data by YCharts. The five-year price action of the Big Three telecoms.

Does it make sense for you to invest in these telecoms?

The Big Three telecoms have been dividend payers for many years. That’s why many investors hold one or more for stable dividend income. BCE and TELUS investors have enjoyed increasing dividends since 2009 and 2004, respectively. Rogers, BCE, and TELUS currently offer yields of 3.3%, 5.2%, and 4.9%, respectively.

Despite the impacts of the new unlimited data plans, the telecoms’ earnings should still be sufficiently stable to support their current dividends. Therefore, the decision to invest in them lies in their current valuations. Are they cheap enough to be worth your investment dollars today?

Which telecom is the best buy right now?

At $61 per share, Rogers trades at a price-to-earnings ratio (P/E) of 13.8, while it’s estimated to increase its earnings per share by about 6.6% per year over the next three to five years. Its payout ratio is roughly 45%.

At about $61 per share, BCE trades at a P/E of 17.4, while it’s estimated to increase its earnings per share by about 4% per year over the next three to five years. Its payout ratio is roughly 90%.

At about $45.80 per share, TELUS trades at a P/E of 15.9, while it’s estimated to increase its earnings per share by about 4.7% per year over the next three to five years. Its payout ratio is roughly 78%.

Due to trading at a lower valuation and having higher growth potential, Rogers appears to have the best total returns potential at this time. However, to be cautious, investors should wait for a bottom in the stock before beginning to scale in.