Reports first surfaced a little over a month ago that Fitbit (NYSE: FIT) was putting itself on the auction block, and it seems that the process is moving along. While there’s a strong case that Amazon.com would be a good fit to buy Fitbit, Alphabet (NASDAQ: GOOG) (NASDAQ: GOOGL) subsidiary Google had been quickly named as a potential suitor, too.

Will the search giant end up pulling the trigger?

An offer is on the table

Reuters reports that Google has formally made an offer to scoop up the wearable tech company, sending Fitbit shares 31% higher by the close. CNBC also corroborated the news. The reports did not specify how much Google has put on the table, and the outlets’ sources note that talks could still fall through and an acquisition may not materialize.

Fitbit has struggled in its pivot to smartwatches, with some products resonating with consumers while others flop. For instance, the Versa Lite failed to meet sales expectations, resulting in Fitbit cutting its full-year 2019 forecast in August. That news sent shares to all-time lows, with Fitbit’s market cap briefly dipping below $1 billion for the first time. 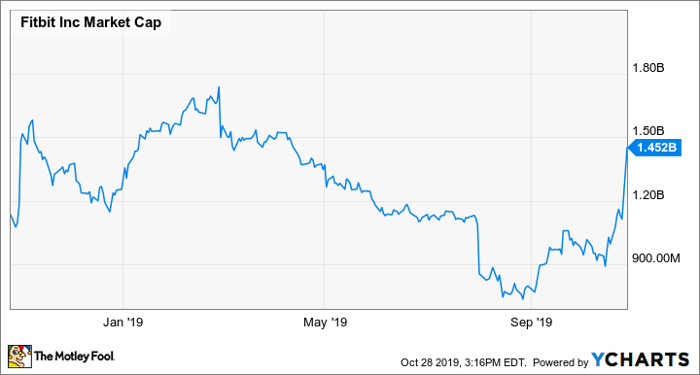 Following the Versa Lite debacle, the company launched the Versa 2, and investors are awaiting indications from management on how that smartwatch is selling. Fitbit is set to report third-quarter earnings on Nov. 6.

Google needs to put Wear OS out of its misery

If Google were to move forward with the acquisition, it would instantly become the No. 2 player in the smartwatch market behind Apple after years of flailing with Wear OS. Third-party manufacturers have largely abandoned Google’s wearable platform in favor of proprietary operating systems like Samsung‘s Tizen, which powers the South Korean conglomerate’s Galaxy Watch.

Many were expecting Google to unveil a Pixel Watch this year as part of its growing hardware portfolio, but that device was reportedly axed years ago by hardware chief Rick Osterloh, which makes Google’s $40 million purchase of smartwatch technology from Fossil earlier this year all the more confusing. It’s still unclear what intellectual property Google bought from the accessory maker, but some employees were part of that deal as well.

Buying Fitbit would mean that Google would have two disparate smartwatch platforms. Fitbit had assembled its platform by cobbling together parts from Coin, Vector, and Pebble, three companies it had acquired over the years. If Google acquires Fitbit, it should finally kill off Wear OS once and for all and continue building on the progress that Fitbit has made with Fitbit OS.