When it comes to the stock market, investors in Canada can make a lot of money by buying stock in companies with significant market power.

When there are fewer suppliers and less competition in the market, prices tend to be higher. The higher prices in sectors controlled by a monopoly or an oligopoly then lead to higher profit margins and better returns for investors.

The easiest way to achieve alpha-level returns in your retirement portfolio, Tax-Free Savings Account (TFSA), and Registered Retirement Savings Plan (RRSP) is to buy dividend stocks with high-profit margins that are too big to fail (like the banks).

You can find plenty of companies with substantial market power in Canada on the Toronto Stock Exchange. TMX Group Inc (TSX:X) is one such company and probably the number one monopoly stock to buy in 2020.

Take a look at the 10-year stock price history of TMX Group, Canadian National, and Canadian Pacific compared to the S&P/TSX Composite Index: 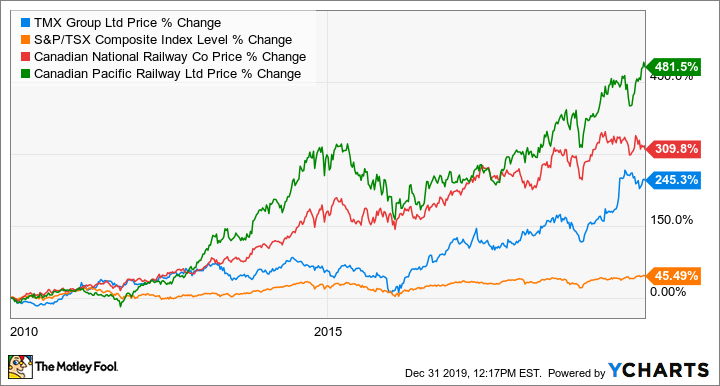 Canadian Pacific led the way with a 481.5% gain in stock market value, although with more downside volatility around 2015.

In the second place, the Canadian National Railway outperformed the S&P/TSX Composite Index with a 309.8% rise in its stock price. The TMX Group also experienced a spectacular increase in value by 245.3% over the past 10 years.

These were three of the top Canadian companies that led the S&P/TSX Composite as a whole to gain 45.43% over the past 10 years.

If you do not own these dividend stocks in your TFSA, RRSP, or general investment account, you should buy these stocks as soon as possible for the new year because these stocks aren’t going anywhere but up.

The TMX Group beat the TSX Composite for 2019

Even though the price on TMX Group stock only appreciated by half the increase of Canadian Pacific over 10 years, it led the way in gains this year. Shares of the TMX Group soared 57.52% last year.

Out of all three, the Canadian National Railway was the only one to lag behind the S&P/TSX Composite Index last year at 16.53% versus the index return of 19.85%.

Canadian Pacific Railway still beat the S&P/TSX Index at a 37.13% return during 2019. If I had to guess, Canadian National, last year’s industry lagger, could very well be the winner in 2020.

You can’t beat the profit margins of these stocks

What’s the secret behind the price performance of these three dividend stocks? The companies all boast substantial market power in their industries, boosting profit margins.

If you’re looking for top dividend stocks to buy in 2020 to beat the S&P/TSX Composite Index, you can’t go wrong buying shares of these three companies with market power.