A high yield can be quite alluring. In some cases, a high dividend yield is sustainable, and investors can enjoy a significant income stream. However, at times, it can be a sign that the company is in trouble and that a dividend cut may be imminent.

One high-yielding company that generates plenty of interest is Arc Resources (TSX:ARX). As of writing, the company has an 8.4% yield and is trading at $7.14 per share, slightly above its 52-week low. Arc is a Western Canadian, independent oil and gas producer. It produces light, medium, and heavy crude, condensate, NGLs, and natural gas.

Through the first nine months of 2019, it has produced 136 million barrels of oil equivalent (Mboe) per day. Of that, the two major sources of production are natural gas (74%) and crude oil and condensate (21%). It has approximately 879 Mboe of proved and probable reserves.

Arc Resources hasn’t been a good investment for shareholders. Since 2014, the company has been in a downward trend and has lost more than 75% of its value. 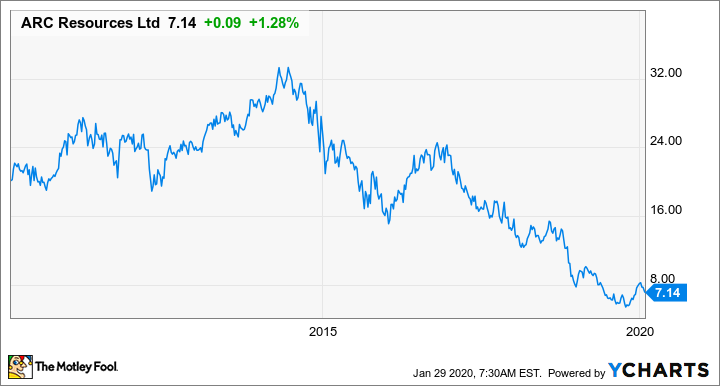 In mid-2016, the company was trading near $24 per share before it began the most recent downtrend. Since then, Arc has seen no sustained upside, and as such, it is safe to say that Arc is in the midst of a multi-year bear market.

At the heart of the company’s issues is the price of natural gas. Since natural gas accounts for more than three-quarters of production, the company is highly exposed to the commodity price.

Given the poor stock performance, it is not surprising that company’s yield is inflated. Although it has come down from its mid-teen highs, the yield is still significantly above historical averages.

Over the past 12 months, however, FCF has cratered, and Arc has generated only $20 million. Since the annual dividend payout is approximately $212 million (based on 353 million shares outstanding), the company has effectively borrowing to pay the dividend over the past year.

Companies can usually navigate such issues over a short period. Remember, this is a company whose dividend was well covered by FCF (four times) as recent as 2018. The problem, however, is if the price of natural gas remains low for a prolonged period.

In this case, a dividend cut would be prudent, and it is something Arc has done in the past. Amid the record low prices in 2016, Arc slashed its monthly dividend in half from $0.10 to the current $0.05 per share in February of 2016.

On the bright side, Arc is expecting a $200 million drop in capital expenditures in 2020. This alone would almost cover the dividend. Likewise, production is expected to jump by 14% in 2020, and the company is one of the least leveraged in the sector. Being unburdened by high debt, the company will be able to weather a prolonged bear market better than most.

I am not ready to declare that a dividend cut is imminent. Thanks to its low-leverage, increased production, and capex profile, Arc Resources has some flexibility to maintain the dividend.

The question then becomes, is it good business practice for the company to maintain such a high dividend when the price of natural gas is near all-time lows? Perhaps it would be wise to take a more conservative approach to cash allocation. It’s a stance management has taken once before and may again. As such, I am also not ready to declare that the dividend is 100% safe.

Fool contributor Mat Litalien has no position in any of the stocks mentioned.