Some stocks have already recovered from March’s market crash. In the case of Shopify (TSX:SHOP)(NYSE:SHOP), the stock hasn’t just recovered; it’s soared to new all-time highs. As of Friday’s close, the stock hit $831.52, the highest level it has ever reached. That put Shopify’s year-to-date returns at over 61%. Meanwhile, the TSX is still down 19% thus far in 2020. Shopify’s valuation has gotten so high that its market cap by the close of last week was just under $97 billion. It’s now within striking distance of Toronto-Dominion Bank. The top bank stock has a market cap of around $103 billion. Shopify’s also more valuable than Canadian National Railway, which has a market cap of $80 billion.

Has the valuation gotten out of control?

Shopify’s valuation looks bloated because not only has the company not recorded a profitable year, but its losses have actually gotten bigger as its sales have been growing; investors would normally expect to see the opposite. Big tech stocks like Facebook, Alphabet, and Amazon are at high valuations but they’re also posting profits: 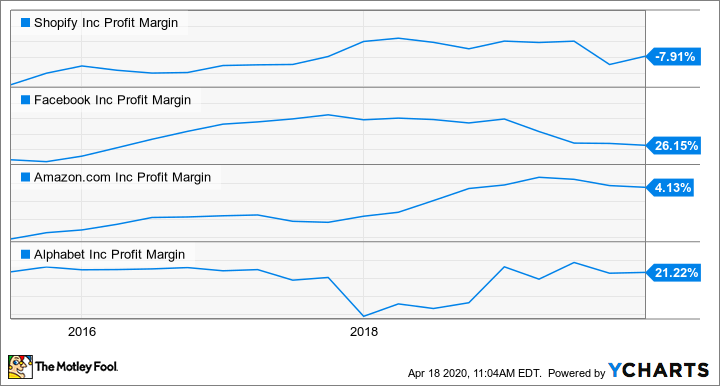 Even if we take into account Shopify’s sales in relation to its market cap, the numbers still tell us the stock is wildly overpriced compared to these other tech stocks: 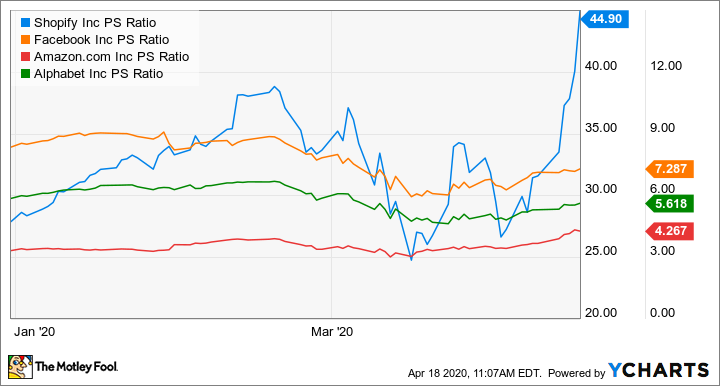 Why are investors so bullish on Shopify?

One of the reasons that Shopify got a boost in its share price last week was likely due to more bullishness in the markets. We saw both the Canadian and U.S. markets bounce back again, as a rally appears to be underway in the markets after a horrible March.

However, in Shopify’s case, there was another factor that accelerated the stock’s growth later in the week. The company’s chief technology officer tweeted on Wednesday that the platform was “handing Black Friday level traffic every day,” which got investors excited. However, what the tweet didn’t say was how much that actually translated into sales. After all, people are spending more time online these days, because there’s not a whole lot else that they can do.

Investors need to be careful in assuming that higher traffic levels will result in more spending on the platform. Many people have lost jobs and have less money to spend on anything. And so, while traffic and spending may be up in the short term, it’s not a sustainable long-term trend that investors should expect from Shopify, especially with Canada’s unemployment rate expected to hit highs that it hasn’t seen in decades as a result of the coronavirus pandemic.

There’s a lot of hype fueling Shopify’s soaring stock price. While the temptation may be to jump on board for the ride, the bubble is only going to get bigger. And that’s going to put investors at significant risk when it inevitably pops. Shopify’s been overvalued for a long time, and it’s now gotten to epic proportions. With a slowing economy, the stock is going to be one of the most vulnerable, as people become more careful with their money and tighten their budgets. It may not happen immediately, but investors should expect to see a significant correction in Shopify’s stock price at some point this year.

2 Top REITs You Can Buy and Hold Forever

These two top REITs are among the best options for long-term, buy-and-hold investors in this current uncertain market.

Could Bombardier Stock Be a Big Winner in 2023?

Bombardier stock outperformed the TSX Composite Index last year by executing its turnaround. Could it continue the momentum in 2023?

Here are three cheap stocks that are well positioned to reward investors in the months ahead.

Looking for Yield? 2 Top Bond Proxies Could Be Just the Ticket

3 Blue-Chip Dividend Stocks I’d Buy Over and Over