It’s a bit difficult to believe any company will ever truly thrive again, here in the midst of a global lockdown intended to contain the coronavirus outbreak. Some pundits are forecasting a 50% setback for stocks, while others suggest we’ve already entered a recession whether we realize it or not.

The fact of the matter is, however, capitalism always eventually finds a way. Not only will most companies push their way through the crisis and start to grow again, a handful of names are well-positioned to drive outsized top- and bottom-line growth.

Here’s a rundown of four companies with big-time potential for gains once the impact of COVID-19 finally recedes.

Proofpoint (NASDAQ:PFPT) isn’t exactly a household name. The cybersecurity company sells its product on a subscription basis. It’s a crowded arena, and Proofpoint isn’t the biggest name in the business.

In some regards, though, this organization’s smaller size may be working to its advantage. Solely focused on cybersecurity, this year’s as well as next year’s sales are expected to grow in excess of 18%, extending a trend that’s been in place for a long while. Better yet, this persistent progress also means the company’s bottom line has turned the corner. While not yet profitable on a GAAP basis, its losses are expected to start shrinking rather than widening from here.

Perhaps best of all, cybersecurity is one of those things no company can afford to skimp on, recession or not. 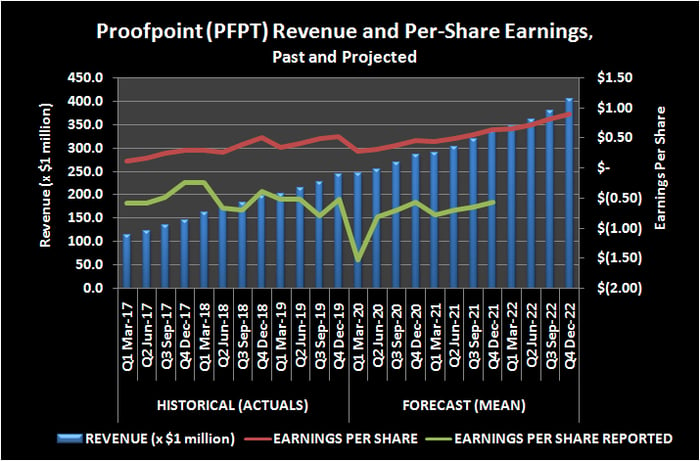 Shopify (TSX:SHOP)(NYSE:SHOP) was competing with a much bigger Amazon.com (NASDAQ:AMZN) on its own even before the COVID-19 contagion took hold. But, in some ways, the impact of the pandemic may have underscored Amazon’s weakness that Shopify has been quietly exploiting for some time now.

It all boils down to one simple matter: By selling goods from its own inventory of products, Amazon actually competes with the third-party sellers also plugged into its platform. Were it done sparingly to fill a merchandise gap, its selling partners might shrug it off. But the e-commerce giant seems to be using third-party sales data to develop its own best-selling products. Then, in the midst of the coronavirus outbreak, Amazon told third-party sellers of nonessential items they’d have to temporarily find their own warehouse/storage solutions. Amazon was only aiming to meet the dire need at hand by limiting intake to essentials like cleaning supplies and OTC medicines. Still, the move demonstrated just how much control the biggest online shopping platform in the world has over several million merchants.

Shopify sidesteps that prospective conflict of interest by being the exact opposite of Amazon. The organization helps small companies build their own e-commerce presence so they can be fully self-reliant. It’s a niche that is paying off for Shopify. 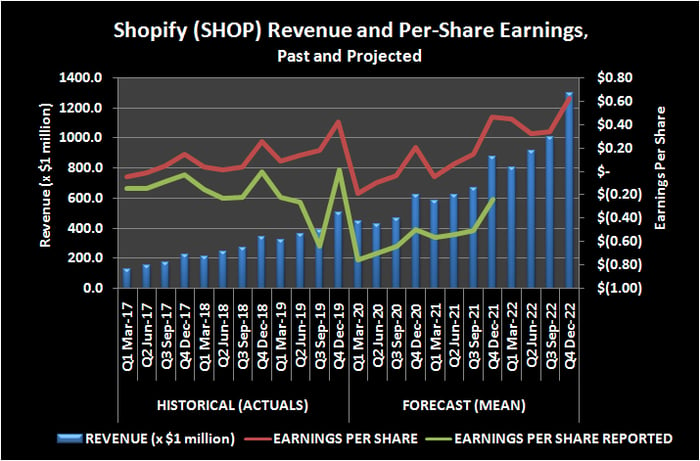 Odds are good that the average investor couldn’t name even one of the approved drugs Ionis Pharmaceuticals (NASDAQ:IONS) currently markets, let alone all three. That’s not necessarily a bad thing, though. By remaining off the radar and not taking aim at massive opportunities with potential blockbuster therapies, Ionis also faces little to no competition.

It’s a strategy that’s turned out well for shareholders. The late-2016 approval of its Spinraza for spinal muscular atrophy was the first of its kind, while the 2018 approval of Tegsidi as a treatment of the polyneuropathy of hereditary transthyretin-mediated amyloidosis has proven to be another big win for the relatively small biopharma name. Revenue growth hasn’t always been even, but on the whole it’s been plenty impressive.

More growth driven by niche drugs should be in store, too. As fellow Fool Taylor Carmichael explained earlier this year, the European Medicines Agency (EMA) has designated Ionis Pharmaceuticals’ ION373 an “orphan drug” for the treatment of Alexander disease. The designation doesn’t assure an approval, but it does indicate that regulators see an urgent, unmet need. 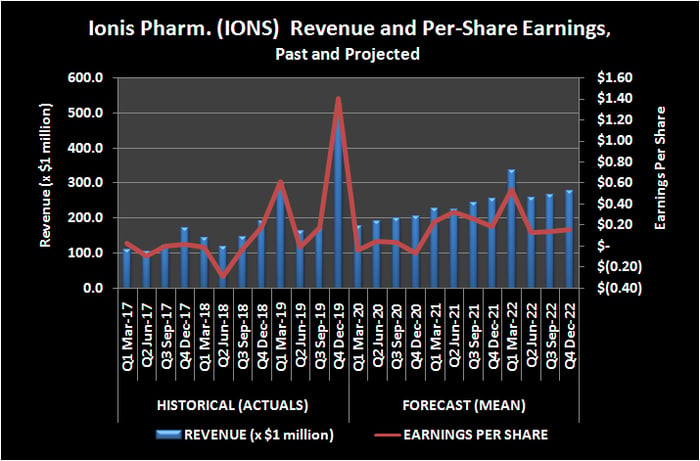 Finally, add RingCentral (NYSE:RNG) to your list of prospective monster stocks that could be catapulted higher with the right push.

It’s one of several technology names that moved into the spotlight when millions of people were suddenly — and unexpectedly — forced to work from home yet still communicate with co-workers. The company offers cloud-based collaboration tools, online meetings, and even video conferencing. RingCentral also claims to be the “world’s #1 business communications platform,” and although it doesn’t explain exactly the criteria used to make the claim, there’s no denying it’s racked up plenty of legitimate accolades over the years. Frost & Sullivan, for instance, gave the company its 2019 UCAAS (unified communications as a service) Market Leadership Award.

It’s anybody’s guess how much new business RingCentral won as a result of work-at-home mandates, and certainly, some of these new customers will discontinue their use of online communication tools once people can actually return to work. Other employers are likely to continue using these platforms, however, and RingCentral’s fiscal history confirms it was already doing something right in meeting the needs of businesses even before the coronavirus took hold. This year’s top line was projected by analysts to grow nearly 24%, and next year’s estimate shows a slight acceleration in sales … and earnings. 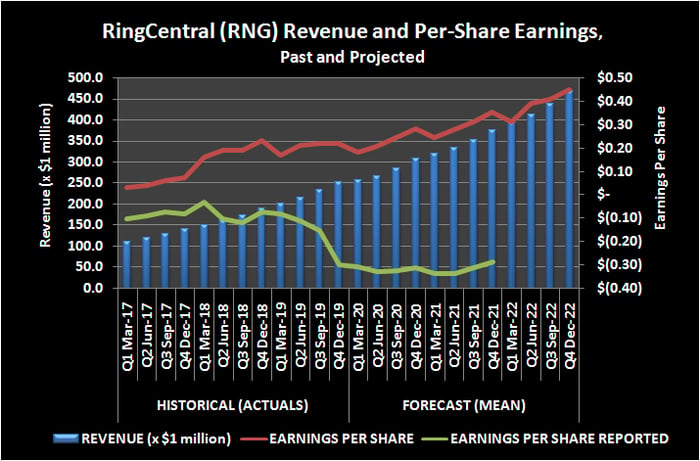