Earnings season has begun, which means there’s going to be a whole lot of bad news coming out in the weeks to come. Companies will be slashing forecasts and announcing cost-reduction strategies in order to combat the impact that the coronavirus pandemic will have on their financials.

Even investors who hold banks stocks may want to consider whether they should hang on to their shares before the banks release their earnings or not, as they could be headed even further down.

Wells Fargo and JPMorgan Chase & Co both released their earnings last week, and both stocks were down more than 10% within just a few days of reporting their results. Concerns of defaults and JPMorgan CEO Jamie Dimon saying there’s a “likelihood of a fairly severe recession” on the way likely sent investors into a bit of a panic.

And the reality is that when the big Canadian bank stocks release their earnings next month, they may not have much better news to report.

A gloomy outlook for the future could lead a top bank stock like Royal Bank of Canada (TSX:RY)(NYSE:RY) back to the 52-week low it reached in March when the markets were crashing. And that’s why for investors who are holding bank stocks, it may be worth considering selling your shares before that news comes out.

However, if you’ve held on to your shares for years and a 10% or 20% drop in price won’t put a big dent in your overall investment, then you’re likely better off hanging on.

Shares of RBC and other bank stocks will recover over time. They recovered after the financial crisis more than a decade ago and they’re safe bets to recover from the coronavirus pandemic as well.

But much more of a decline isn’t all that likely

While bank stocks may fall after they release their earnings, investors shouldn’t get too greedy and expect that they might fall much further than where they already are today. Here’s how investors have valued RBC stock over the past 12 years, based on its price-to-earnings (P/E) multiple: 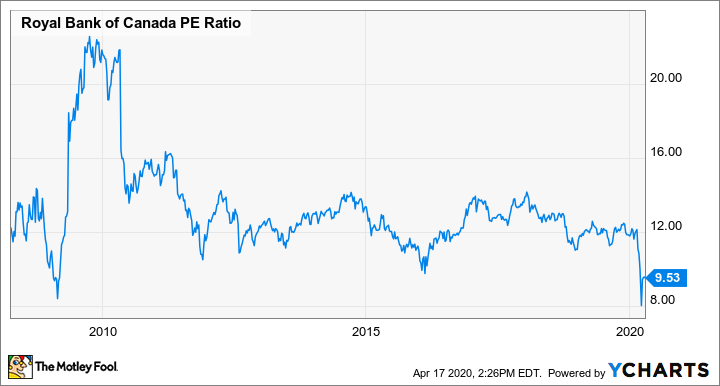 Even during the 2009 downturn, RBC’s P/E didn’t fall as low as it did these past few weeks. And so while banks stocks may suffer declines when they go to report their earnings, they likely won’t be drastic enough that it makes sense for investors to wait.

The danger is that by waiting for more of a decline to come, investors may risk missing out on stocks that are already bargain buys today.

RBC’s stock may suffer some losses in the near future but history says that it’s likely the stock is not only a good buy at today’s prices, but that it will recover as well.

Its dividend is currently yielding around 5% per year which is a very good payout for the top bank stock. Even if it stops increasing its payouts amid a recession, you’ll be hard-pressed to find a much higher and safer yield than RBC.