The S&P/TSX Composite Index is on an upswing. Since the beginning of April, the Index is up 16.23%, as it tries to recover from the March lows. The S&P/TSX Financial Index, which includes Canada’s big banks, is struggling to keep pace. Up only 4.52% over the same period, the Financial Index is still down 22.53% year to date. In comparison, TSX Index is now down by only 12.29%.

Canada’s Big Five are also struggling. In fact, it is the first time in years that they all trail the S&P/TSX Composite returns. Royal Bank of Canada tops the group with losses of 16.94%, while Bank of Montreal trails with a loss of 32.09% in 2020.

The Big Five are also not benefiting from the current rebound. In fact, four of them are trailing the Financial Index during this market rally. The lone outlier is Canadian Imperial Bank of Commerce, which is up by 6.60% since the start of April. This, however, is still well below the performance of the broader market. 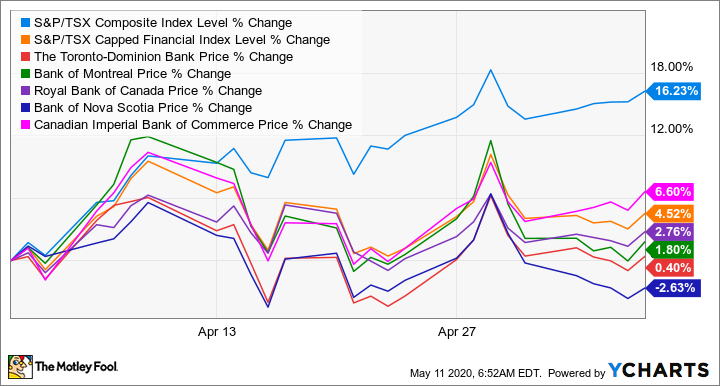 Given the recent underperformance, is now the time to scoop up Canada’s big banks?

Last week, Toronto-Dominion Bank gave investors a glimpse into the potential damage ahead. The bank announced that it is setting aside $1.1 billion to cover loan losses in its U.S. retail segment.

To put this into perspective, it represents a 345% increase over the last quarter and a 487% increase over the second quarter of 2019. No further insight was provided, as it did not pre-announce PCLs in any other segment, including its Canadian retail division.

There is no doubt that loan losses at Canada’s big banks will rocket upwards. Since PCLs appear on the income statement as an expense, it will be a big hit to earnings. The question becomes, are we at the peak?

First, it is important to recognize that PCLs are an estimate to account for potential bad loans and customer defaults. It is forward looking in that it is an estimation of how much the bank needs to set aside to cover these losses. In other words, they are front-loaded.

This means it is likely that the big jump in PCLs is a one-time event, and we may be nearing peak losses. From a historical standpoint, this could be good news.

Canada’s big banks are a buy

Over the past 25 years, there have been three periods in which PCLs spiked — 2002, 2009 and 2016. In each case, Canada’s big banks collectively outperformed the S&P/TSX Composite Index by a fairly significant margin.

Since PCLs are front loaded, it is likely that a high spike in PCLs is a signal that we are near the peak. Given the economy is gradually re-opening, now might be the perfect buying opportunity.

Canada’s big banks are still trading at ridiculously low valuations. In several cases, they are trading near the lows of the Financial Crisis. It is an opportunity that won’t last long.