The recent March 2020 market crash has left many stocks undervalued on the Toronto Stock Exchange. On the other hand, the stock market volatility may have also created undue enthusiasm toward some alternative energy stocks like Ballard Power Systems Inc (TSX:BLDP)(NASDAQ:BLDP).

Since the start of the year, the price of Ballard Power Systems has increased by 45.69%. Compared to the 14.21% decline in the S&P/TSX Composite Index, this is a fantastic stock performer! 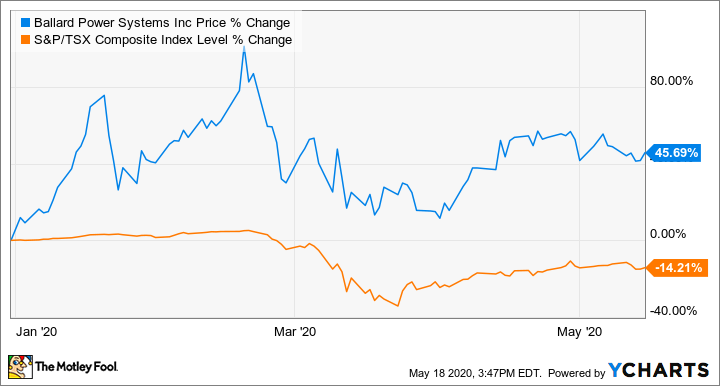 While conservative investors might view the stock as a safe haven, long-term investors should still be wary. Unrealistic growth expectations could be the motivation for the stable price trend during the market downturn.

Analysts list Ballard Power Systems as a major fuel cell player over the next decade.

Environmentalists and government agencies hope that fuel cell technology like that produced at Ballard Power Systems will delay environmental damage and global warming. The next decade will be a crucial turning point for companies like Ballard to capture their share of the growing automotive fuel cell market.

Ballard Power is definitely not a pick for value investors inspired by Warren Buffett. We can’t calculate the P/E ratio because earnings were a negative $39 million for 2019.

Further, the price-to-sales (P/S) ratio on Ballard Power is an expensive 19.21! A P/S ratio of anything over 1 is expensive for long-term investors interested in buying stocks at a discount.

Even worse: the price-to-book (P/B) ratio is 7.93. Again, value investors want to purchase stocks with low price ratios. Thus, Ballard Power is a growth buy, if anything.

Will Ballard Power grow into its market valuation?

There are always risks that new technology won’t succeed, such as the infamous Blu-Ray versus HD DVD optical disk war of the early 2000s. Alternatively, a competitor can siphon off the competition, as the case with BlackBerry and Apple.

If you want to know whether Ballard Power will grow into its stock market valuation, you need to look at its competition. Alternative technology and more powerful players are the top threats to retirement portfolios containing Ballard Power stock.

Nevertheless, demand for automobiles will impact these growth rates. A looming recession and increased demand for public transportation could all stifle these estimates.

When it comes to stock market investing, nothing is a sure thing. However, if you have spare cash lying around that you won’t need for the next eight years, there’s no harm in adding some risk to your TFSA or RRSP with this growth stock.