The broader markets remain volatile due to the ongoing COVID-19 pandemic. But the recent pullback gives investors with a long-term horizon an opportunity to create massive wealth. Investing in your Tax-Free Savings Account (TFSA) should be a top priority. While contributions to this account are not tax deductible, any withdrawals in the form of capital gains or dividends are tax-free.

The COVID-19 pandemic is likely to be a near-term headwind, which means markets should rebound once the dreaded virus is brought under control. It is important to bet on the Canadian and U.S. economies given that they have survived multiple past recessions.

Investment mogul Warren Buffett famously stated, “In the 20th century, the United States endured two world wars and other traumatic and expensive military conflicts; the Depression; a dozen or so recessions and financial panics; oil shocks; a flu epidemic; and the resignation of a disgraced president. Yet the Dow rose from 66 to 11,497.”

So where do you invest this money in a market that is fluctuating wildly?

Growth stocks for your TFSA

Growth stocks have generated staggering returns in the past. These companies increase revenue and earnings at a far greater pace than the overall market. A solid growth rate ensures that such companies are valued at a premium, which means they tend to outperform broader markets over time.

While there are tons of growth stocks south of the border such as Lululemon Athletica, Okta, and Zoom, you can look at Canada’s homegrown giants as well. 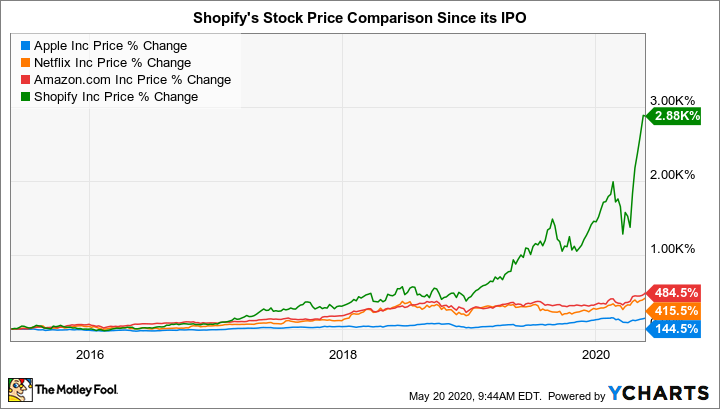 Shopify (TSX:SHOP)(NYSE:SHOP) has crushed market returns since it went public in May 2015. As we can see in the above chart, Shopify has easily outperformed Apple, Netflix, and Amazon since its IPO and has returned close to 3,000% in five years.

Shopify stock is trading on the New York Stock Exchange at a price of $753; it recently surpassed the $1,000 mark on the TSX. This stupendous growth has driven Shopify’s stock to sky-high valuations, and it’s now valued at US$80.9 billion, or a whopping 40 times its 2020 sales. While investors are rightly concerned over its nosebleed multiples, Shopify remains a top bet for the upcoming decade.

As people are largely confined to their houses, the shift to online shopping has accelerated. Shopify is already the second-largest e-commerce platform in the United States behind Amazon. It is well poised to grow market share in the e-commerce segment and is outpacing several peers.

Shopify stock should be bought at every major price correction. It holds the potential to be Canada’s first trillion-dollar company given its growth trends and an expanding addressable market.

Shopify is but one example of a quality growth stock for your TFSA. You need to create a robust portfolio of such companies with the potential to generate exponential returns in the upcoming decade.