The Motley Fool Canada » Cannabis Stocks » Is it the Perfect Time to Buy Pot Stocks?

The popular pot stock, Village Farms International Inc (TSX:VFF)(NASDAQ:VFF) traded for around $5.96 per share as of Thursday’s market close. You can buy 100 shares of Village Farms for only $596. But is it a good idea to buy this cannabis stock? 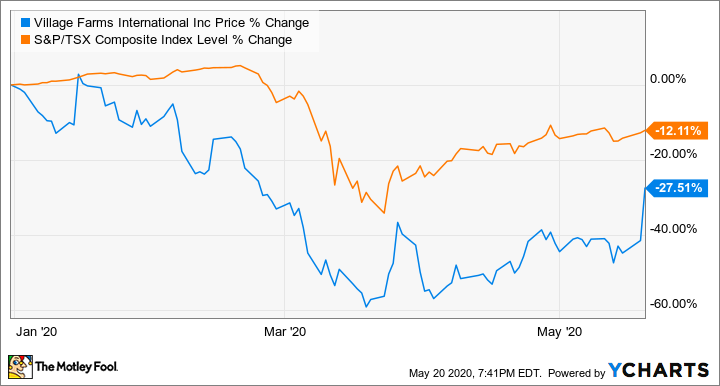 Just because a stock is underperforming the index today, it doesn’t necessarily mean you should avoid the stock altogether. Some traders believe that deviations from typical correlations between assets represent an arbitrage opportunity.

Village Farms may have had a tough run during the COVID-19 market turbulence, but its long-term performance is still looking pretty good.

In the past three years, Village Farms stock has gained 244.1% in market value. In contrast, the S&P/TSX Composite Index fell by 2.98% over the same period. Even better: It seems that Village Farms may be hitting a three-year (approximate) price support.

When stocks hit support levels or a price at which it hasn’t fallen below within a specified time frame, investors may want to begin considering the asset a potential buy.

Nevertheless, even when a stock hits a support level, it doesn’t mean the price of the asset cannot fall further. The stock can always hit new lows.

Is VFF reporting better earnings than this pot stock?

Some pot stocks are getting more attention despite weaker perceived earnings than other marijuana stocks, leaving investors baffled. Individual investors have taken to Twitter to comment on the outsized market responses to Aurora Cannabis earnings versus the relatively better reports from both Organigram and Village Farms:

The disparity in market capitalization could be related to differences in book value and revenue. Village Farms only has a book value per share of 2.4, while Aurora Cannabis offers shareholders a book value of 3.29 as of the most recent quarter.

It is hard to say if and why Aurora Cannabis is experiencing stronger gains in response to weaker perceived earnings results than some of its peers. Perhaps the company has better relationships in the financial world. Networking is critical to attracting capital at every stage of a company’s development.

Stocks don’t always trade on fundamentals, however. When a stock is trading at prices that seem counterintuitive even from a growth standpoint, I become suspicious.

At the end of the day, I’d say that both Village Farms and Aurora Cannabis are great retirement investments for your TFSA or RRSP, despite the general idiosyncratic and market risks involved.

If you are interested in learning about other cheap stocks . . .