While the broader markets are still trading in the red for 2020, e-commerce companies continue to touch record highs. Shares of Shopify (TSX:SHOP)(NYSE:SHOP) and Amazon (NASDAQ:AMZN) have returned 92% and 34%, respectively, in 2020. These two e-commerce giants have crushed market returns for a few years now.

In the below chart, you can see how the two companies have performed since Shopify’s IPO back in 2015. While Amazon stock is up 483%, Shopify shares have returned a staggering 2,870% in just over five years. But past returns matter little for investors. Let’s take a look to see which stock is a better buy for 2020 and beyond. 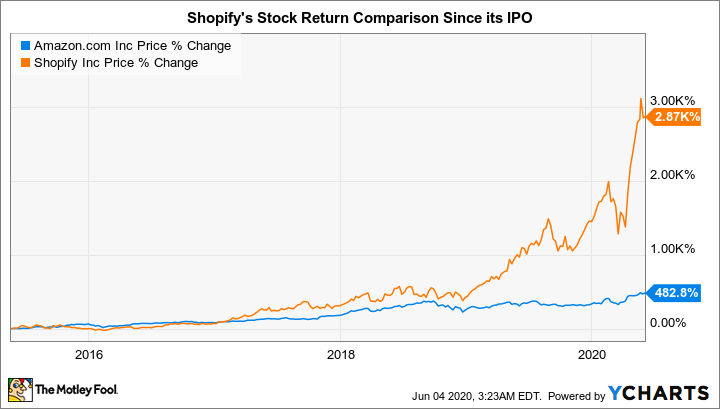 The case for Shopify

According to the company presentation, Shopify is the second-largest e-commerce platform after Amazon in the United States. Shopify has two primary business segments that are merchant solutions and subscription solutions.

The merchant solutions business generates revenue from transaction fees as well as by shipping and delivery services. Its subscription business provides sellers with services such as web design, payment processing, online marketing, and digital storefronts.

Shopify sales have risen from US$205 million in 2015 to US$1.58 billion in 2019 and are estimated to touch US$2.2 billion this year. The COVID-19 pandemic has accelerated the trend towards online shopping, and this will drive company top line in the upcoming decade.

A recession or economic slowdown due to the COVID-19 will lead to lower consumer spending and impact Shopify’s revenue growth. But this may be offset by the shift towards e-commerce. Shopify depends on the growth of its merchant base to increase subscription and merchant solutions sales. At the end of 2019, it had over a million merchants on its platform.

Shopify continues to reinvest heavily in capital expenditure. In 2019, it announced an investment of $1 billion (over the next five years) to set up a network of fulfillment centres. This will enhance the merchant experience and result in incremental sales for the firm.

The case for Amazon

Amazon’s online retail business continues to be the company’s largest segment. Similar to Shopify, Amazon will also benefit from the ongoing shift to e-commerce. However, Amazon is not just dependent on e-commerce for sales growth. It is well diversified and one of the largest companies in the world.

Amazon is a major player in the public cloud, online streaming, and digital advertising businesses that continue to grow at a rapid pace. It accounts for over 30% in the public cloud market and is the third-largest digital ad platform after Facebook and Alphabet’s Google. Amazon will also benefit from the shift to online content consumption over the next decade.

Amazon stock has generated multi-fold returns for investors since its IPO. For example, a $1,000 investment in Amazon stock during its IPO would have returned a staggering $1.43 million today.

It is difficult to pick between two technology giants. Analysts expect Shopify sales to rise by 37.3% in 2020, and for Amazon, this figure is 23.1%. While Shopify has easily outperformed Amazon in the last five years, the latter’s diversified business verticals make it a better buy.

Both these companies are sacrificing profitability for growth and this strategy has been accepted by investors. In case you have enough capital, you can look to add Shopify and Amazon to your portfolio. Shopify’s high valuation might drive the stock lower in the coming months. But every major dip is a buying opportunity for long-term investors.

Lightspeed (TSX:LSPD) Stock: When Will the Carnage End?

This November, it has been nothing but carnage for TSX growth stocks, especially for Lightspeed Commerce (TSX:LSPD)(NYSE:LSPD) stock. Over the…

It seems as if there should be some end to the drop in Lightspeed Commerce (TSX:LSPD)(NYSE:LSPD). Yet Lightspeed stock continues…

TSX Newcomers That Should Be on Your Scope

Every year, several companies join the TSX or one of the other stock markets here in Canada. Some of them…

Nuvei (TSX:NVEI) or Lightspeed (TSX:LSPD): What Should You Buy?