Early Shopify (TSX:SHOP)(NYSE:SHOP) investors have been treated to quite an amazing ride over the past couple years. The company has become a giant in the e-commerce space, claiming nearly 20% of the global market share. A large contributor to its growth has been the popularity of its platform among online merchants.

At the 2019 Shopify Unite conference, the company announced that 820,000 merchants in 175 countries are currently using Shopify to power their online stores — an incredible increase from the 165,000 merchants at the time of its IPO.

As the company’s platform has grown over the years, so has its revenue. At the end of 2016, the company reported just under $400 million of total revenue. This past year, Shopify’s annual reported revenue was over $1.5 billion. Investors have taken note of its impressive growth over the years and have rewarded the stock accordingly. This brings us to the question at hand: how much money would you have now if you invested $1,000 in Shopify’s IPO?

At the time of this writing, Shopify trades at $1,118.03. This means your initial investment would have turned into $35,776.96; that is an increase of over 3,400%! Your position would have seen an average annual return of 101%, meaning you would have doubled your investment each year on average. 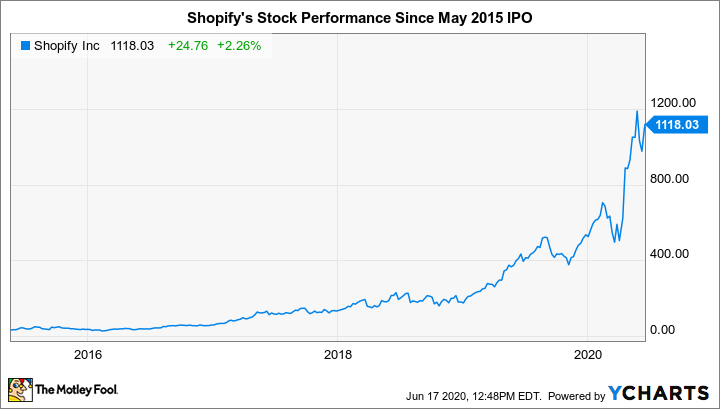 What has been driving its growth?

The dramatic increase in the number of global Shopify merchants was mentioned earlier. However, that number is not the only impressive figure to take note of. The company has also done very well in attracting large companies to use its platform, including: Nestle, Tesla, and Unilever. These larger companies will provide Shopify with some stability in its users, as the number of active smaller merchants can fluctuate more intensely.

The company has also been very active in partnering with other companies to help increase its reach. In 2017, Shopify announced its stores were now able to integrate with Amazon, which would allow merchants to sell on Amazon’s platform through their Shopify stores. In 2020, the company announced partnerships with Facebook and Walmart, further increasing potential avenues for sales.

Is there still room for growth?

After seeing the stock grow as quickly as it has, it is not unreasonable for investors to ask how much potential growth remains in this company. However, there is still reason to believe the company is nowhere near the end of its growth story.

At FoolFest 2020, CEO Tobi Lütke mentioned how special the experience has been, from writing the very first line of code in what would later become the Shopify platform to becoming the largest company in Canada by market cap. As long as he is at the helm, you can rest assured that Shopify will continue to innovate.

Whether it is enabling payments via cryptocurrency on Shopify stores, opening its own brick-and-mortar storefronts, or establishing services such as Shopify Shipping and Shopify Capital, it is only a matter of time until the company announces a new development that will enrich the experiences of both merchants and consumers.