While multiple industries continue to grapple with the impact of the COVID-19 pandemic, technology companies such as Shopify (TSX:SHOP)(NYSE:SHOP) and Zoom Video (NASDAQ:ZM) are easily crushing broader market returns.

In the below chart, we can see that Shopify stock is up 159% in 2020, while Zoom Video has gained 285%. Comparatively, the S&P 500 Index has returned -3% year to date. We’ll take a look at what has driven the share prices higher, and if the companies can sustain sky-high valuations. 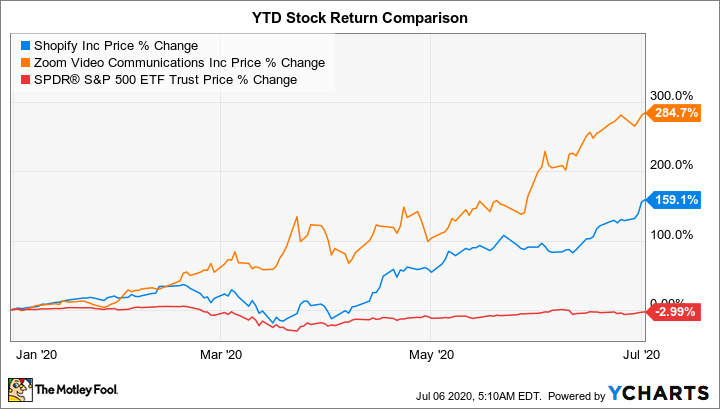 Shopify stock has a market cap of $162.6 billion

Shopify stock has been on an absolute tear — not just in 2020, but since it went public back in 2015. The stock has gained a staggering 5,960% since its IPO. This means if you’d invested $1,000 in Shopify’s IPO, you would have returned close to $60,000 now. This rapid surge in Shopify’s stock price has meant the company is valued at a market cap of $162.6 billion, making it Canada’s largest company in the TSX.

As people are largely staying at home, the trend towards online shopping has accelerated. In the first quarter of 2020, Shopify sales rose by a massive 47% year over year to US$470 million. Further, SME merchants on the Shopify platform experienced a 62% growth in sales between March 13 and April 24 compared to the prior-year period. This transition towards online shopping is likely to drive Shopify sales higher in the upcoming decade.

RBC analyst Mark Mahaney increased the stock’s 12-month target price to US$1,000, up from US$825. Mahaney is optimistic about Shopify’s expanding market opportunity, as the pandemic has altered buying patterns. Shopify stock is currently trading at US$1,029.97.

Shopify stock gained momentum in the last week of June to touch record highs on the back of its partnership with Walmart. According to the partnership, the retail giant will add 1,200 small- and medium-sized Shopify sellers on its platform. Walmart claimed that Shopify sellers have a solid history of beating customer expectations.

Zoom Video stock is trading at $261.74 and has returned 625% since its IPO in April 2019. This is another company that has gained momentum amid the pandemic. As economies were shut, a large number of the global workforce as well as schools and colleges started using Zoom Video’s collaboration tools. Similar to online shopping, the work-from-home trend is also here to stay.

In the first quarter of fiscal 2021, Zoom Video reported sales of US$328.2 million — growth of 169% year over year. This revenue growth helped Zoom Video record a net income of $27 million, which was significantly higher than the prior-year figure of $198,000.

The surge in stock prices of Shopify and Zoom Video has raised concerns about valuations. Shopify stock is trading at a forward price-to-sales multiple of 68, while this ratio for Zoom Video stands at 93. The high valuation metrics might make investors nervous, but growth stocks tend to trade at a premium.

The ongoing rally in Canadian stocks doesn’t seem to be ending soon. While the TSX Composite Index opened on a…

3 High-Growth Canadian Stocks to Buy Ahead of Earnings

Despite Canada’s annual inflation rate rising to 4.4%, an 18-year high, the Canadian equity markets have continued their uptrend, with the…

Shopify Stock: Where Does its Share Value Come From?

Shopify (TSX:SHOP)(NYSE:SHOP) has been probably the biggest winner of the TSX today in the last five years. Shares of Shopify…

Hive vs. Hut 8 Mining: Which Cryptocurrency Stock Is a Better Buy?

Tech stocks are still a great place to invest your money for wealth creation in the long haul. Here are…