Home » Investing » Why Has Scotiabank (TSX:BNS) Underperformed Against Its Peers Since March?

The Bank of Nova Scotia (TSX:BNS)(NYSE:BNS) (“Scotiabank”) is one of Canada’s Big Five banks. The Big Five got hammered in March as global lockdowns took effect. While the Big Five have not reclaimed their pre-pandemic highs,  they are all up significantly from their March lows.

Unfortunately for Scotiabank shareholders, Scotiabank has been the laggard of the pack. This likely has to do with Scotiabank’s unique sector and geographic exposure. 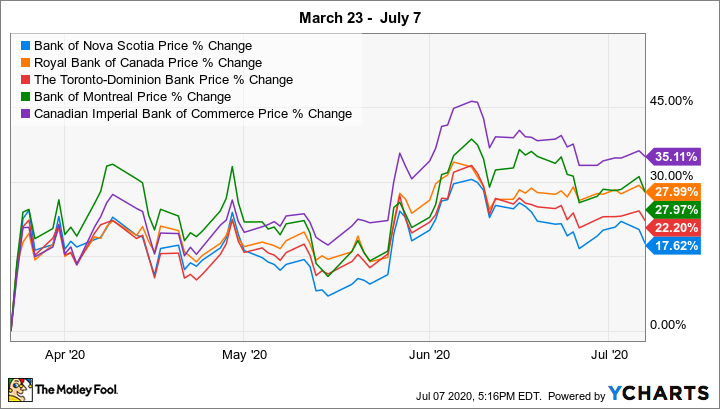 Needless to say, these two sectors have struggled during the pandemic. Many cities in Canada still have restrictions on retail activity. Additionally, the price of oil has taken a major beating, with WTI prices turning negative for the first time in history back in April.

Another important factor is that RBC’s largest client segment is government clients, who represent about 28% of RBC’s business and government loan portfolio.

The conservative exposure to the hardest hit sectors of the economy coupled with a high level of government client exposure means that RBC will likely have a far smaller amount of impaired loans as a result of the pandemic than Scotiabank. Collectively, these factors help explain why RBC has outperformed Scotiabank by 10.37% (as of July 7) since the end of March.

Scotiabank has significant exposure to Latin America compared to the rest of the Big Five. Latin America has been hit hard by the pandemic from an economic perspective. Additionally, from a currency perspective, Latin American currencies have weakened against the Canadian dollar.

This double whammy will disproportionately impact Scotiabank. However, this must be kept in perspective. Scotiabank’s Latin American exposure is still relatively small, composing only about 20% of its total loan book.

Other Canadian Big Five banks, such as Toronto-Dominion Bank (TSX:TD)(NYSE:TD) (“TD”), also have exposure to markets outside Canada. However, in TD’s case, this market is the United States. The U.S. represents about 1/3 of TD’s loan portfolio.

Luckily for TD, the United States has held up much better than Latin America from an economic and currency perspective during the pandemic. This helps explain why TD has outperformed Scotiabank by 4.58% (as of July 7) since the end of March.

TD also has more retail presence in terms of branches in the United States than it does in Canada. This could be problematic given that the United States is still struggling with large amounts of COVID-19 cases in some areas.

However, TD is far ahead of the curve when it comes to technological innovation, and most services have been available online for years. Therefore, prolonged shutdowns or delayed reopenings in the United States should not be a significant drag on TD’s results, which it reports on August 27.

Scotiabank does have a high exposure to the retail and energy sectors, which have both been hit hard during the current pandemic. Additionally, Latin America, which Scotiabank has a lot of exposure to, has suffered significantly from the economic fallout from the pandemic.

However, Scotiank yields over 6%, which is near the high end of its 10-year dividend yield range. Therefore, while it is important to be aware of the unique aspects of Scotiabank’s sector and geographic exposure, those who strongly believe in the retail and energy sector — as well as the Latin American economy — may find Scotiabank very attractive at these levels.

The Motley Fool recommends BANK OF NOVA SCOTIA. Fool contributor Kyle Walton has no position in the companies mentioned.