Don’t look now, but Shopify (TSX:SHOP)(NYSE:SHOP) stock is picking up traction once again after taking a brief breather amid the broader tech-driven correction. Shares of the e-commerce kingpin continue to defy the laws of gravity, now up 20% since September 17. But is this recent bounce just the start of another leg higher (next stop $2,000)? Or could the frothy multiple on the name leave investors at risk of holding the bag if the Shopify stock fails to break out of its $1,450 level of resistance?

Why is Shopify stock leading the upward charge again?

There wasn’t any big news that sent shares surging 6% on Tuesday. Shares appear to be driven by strong technical momentum, with investors backing up the truck on dipped tech firms that view this pandemic as a tailwind.

With the second wave of COVID-19 cases now giving most investors the jitters once again, the appetite for COVID-19 resilient plays and tech stocks riding high on pandemic tailwinds look to picking up again. Dip buyers appear to be backing up the truck on the September tech sell-off. Although Shopify stock technically fell into a bear market in the first half of September, with shares falling over 23% from peak to trough, the fall was hardly remarkable when you consider the sizzling rally out of its March lows.

Shopify more than tripled in a matter of months. Compared to the rally into September, the 23% drop, which is a severe pullback for most other stocks, was a tiny blip in the grander scheme of things. Heck, the pullback is just another small bump in the road when you look at the five-year chart. 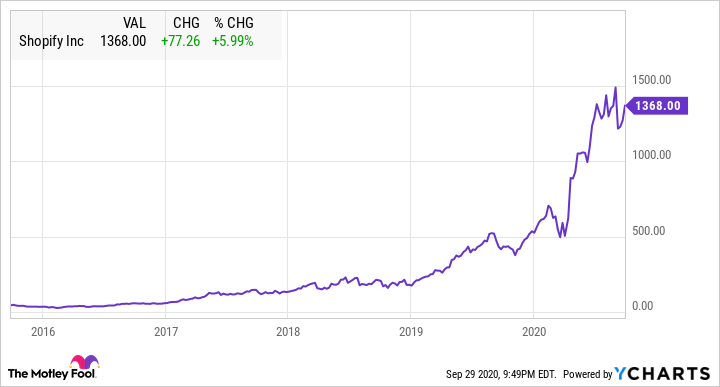 Should investors hop on the Shopify bandwagon after its latest bounce?

Shopify is a 8% bounce away from testing its all-time highs. While I wouldn’t be surprised if the name continues defying the laws of gravity in spite of its frothy valuation, a worsening second wave will cause investors to scoop up the discarded, albeit ridiculously expensive pandemic winners like Shopify.

At the time of writing, shares of Shopify trade at a staggering 56.4 times sales. That’s a nosebleed level valuation, to say the least. While the tailwinds and growth prospects are unfathomably strong amid this worsening crisis, I’d be reluctant to pull the trigger on a full position right here and think Shopify could feel the full impact of another tech-driven sell-off that could continue into year’s end.

Shopify has always been expensive and it’ll never fall to a level where it’d be considerable a value stock. However, the growth story is so incredible that fearless young millennials have few reasons not to at least nibble on any short-lived weakness in the name.

The Canadian e-commerce kingpin is hard to value and will have its fair share of 40-50% corrections. That said, the company and its stock remain unstoppable and its tailwinds profound. Shopify is one of those stocks that remains a prime candidate to dollar-cost average into, given its amplified volatility and unprecedented growth story which seems as unpredictable as it is impressive.

Unless you’re willing to scale into a position by buying one share at a time, I’d much prefer waiting for what I think is a “real” correction (40-50% drop) in white-hot shares of Shopify.

Fool contributor Joey Frenette has no position in any of the stocks mentioned. Tom Gardner owns shares of Shopify. The Motley Fool owns shares of and recommends Shopify and Shopify.