These three unstoppable growth stocks have at least doubled investors’ money year to date! They have had incredible price appreciation over the past five years. Over the next five years, they’re likely to head even higher.

Year to date, Shopify (TSX:SHOP)(NYSE:SHOP) stock and Xebec Adsorption (TSXV:XBC) have been a two-bagger. More outrageously, WELL Health Technologies (TSX:WELL) stock has been a five-bagger! 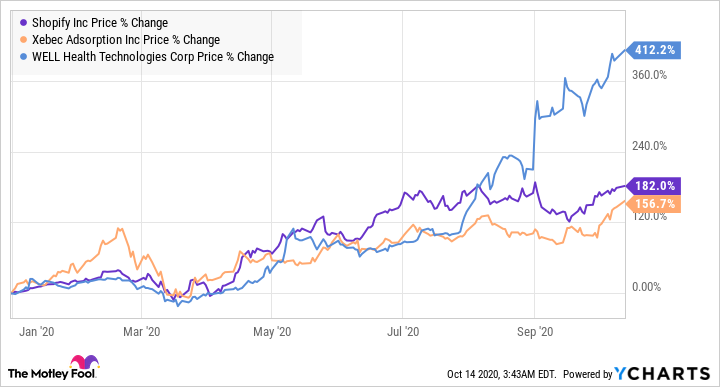 Although these stocks have already gone up a lot, investors can still make money from them in the longer term.

Shopify’s rapid growth has fueled its stock price. However, its stock always appears to be overly expensive.

In the past three years, Shopify quadrupled its revenues, but the stock rose even more — it was an 11-bagger on the TSX!

In the trailing 12 months (TTM), Shopify’s revenue was more than US$2 billion, up more than 60% year over year. This is a big deal in a world where all prominent global economies but one are experiencing GDP contraction.

Most recently, in the second quarter, Shopify increased revenues at an even greater pace of 97%, while growing its gross merchandise volume (GMV) by 119%, as the pandemic pushed businesses to move ahead of schedule on their e-commerce strategies.

Shopify explains that the GMV “represents the total dollar value of orders facilitated through the Shopify platform.” In other words, businesses and entrepreneurs are selling more online and this secular trend has a long growth runway.

Similar to Shopify, Xebec enjoys rapid growth that drives its stock rally. Xebec’s revenue was five times what it was three years ago. The stock was more than an eight-bagger in the period.

In the TTM, Xebec’s revenue was $58.5 million, up about 65% year over year. It also has an order backlog of more than $85 million that validates its proprietary technology.

It also has an industrial service and support segment that generates recurring revenue from providing local service, support, spare parts and remote monitoring for its customers.

WELL Health has a superb management team. Founder and CEO Hamed Shahbazi previously founded TIO Network which was eventually acquired by Paypal. Shahbazi and a part of the TIO management team are now leading WELL Health.

The omni-channel digital health company can continue growing via acquisitions and organically. There are not enough physicians to cater for the growing number of patients. By leveraging technology, WELL Health is modernizing the healthcare scene in Canada and making the lives of doctors and patients simpler and easier.

Today, WELL Health is the third-largest digital electronic medical records (EMR) supplier in the country. Having sufficient scale in the EMR allows it to expand into other services, such as telemedicine and digital engagement with patients.

The company also owns and operates 20 healthcare clinics. In January, the company served about 1,500 medical clinics and 8,000 doctors. These numbers have already grown to 2,000 and 10,000, respectively. The growing scale should allow it to drive down costs over time.

The digitalization of Canada’s  healthcare industry, a growing population, and the disciplined acquisitive nature of the company should allow it to continue to grow at an above-average pace.

These three companies are unstoppable, as they’re in key areas of growth. However, they have appreciated so much in a short period. Building a position in the growth stocks over time — especially on consolidations and dips could be a good idea.