The world is on a decade’s trend to lower carbon emissions. Renewable gases are a part of that solution. Xebec Adsorption (TSX:XBC) is leading this path as a pure-play international renewable gas company.

I began writing about Xebec in February 2020. Since then, the stock has tripled. This is after it already quadrupled from February 2019 to 2020 from a penny stock! The strong price appreciation is a result of a growing company that has executed well.

Basically, the stock has been in an upward trend for at least five years. When a stock has persistent price momentum, investors should take a closer look.

The TSX growth stock recently crossed the $1 billion mark for its market capitalization. Moreover, it just graduated from the TSX Venture exchange to the TSX today! Both reasons should increase interests from institutional and retail investors alike.

Xebec is growing fast. Its last 12-month (LTM) revenue climbed almost 53%, while its gross margin was 24.8%. Its LTM revenue was only $64 million. It has tonnes of room to grow globally.

The company’s Q1-Q3 2020 revenue diversification were as follows 57% from the U.S., 23% Canada, 13% China, and 7% in other geographies. It’d appear that Xebec operates primarily in North America. But its swift global expansion is changing this diversification considerably.

Xebec has been growing rapidly through acquisitions. Its latest acquisitions in December 2020 in HyGear and Inmatec helped to further solidify its position as a renewable gas leader.

HyGear is a Dutch-based leader in onsite hydrogen generation solutions that allows clients to save significant costs from not having to transport hydrogen. At nearly $156 million, this is Xebec’s largest acquisition yet. Due to the monstrous size of this acquisition (compared to its previous acquisitions that were in the $2 to $7 million range), the company essentially funded it with equity offerings.

This transformative acquisition allowed Xebec to accelerate its entry into the industrial hydrogen and hydrogen fuel markets. As well, it provides access to the European market and potential for substantial product and sales synergies.

Xebec is in the renewable gas space that is one of the latest crazes with super-high growth. 12 analysts estimate the stock will grow its earnings per share by 50% per year over the next three to five years!

The market obviously likes Xebec’s acquisition in HyGear, as the stock has appreciated 45% since the announcement in early December 2020. 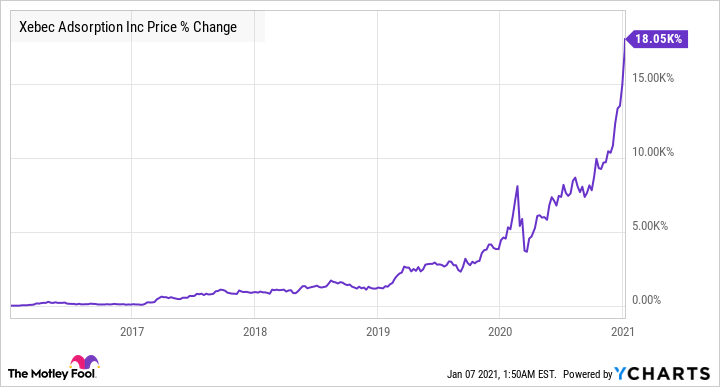 The green energy stock has climbed at lightning speed. It has doubled in the last three months and almost quadrupled in the last year. Some early investors in the stock might take profit after it graduates to the TSX to pursue the next big thing.

So, if you like Xebec after doing your own research, consider building a position over time. For example, buy a starter position now and potentially add to it on pullbacks of, say, 15-30%.

Other than Xebec, these stocks can also make you super wealthy.