Home » Investing » Want Tesla-Like Returns? This TSX Stock Is for You!

Electric auto maker Tesla (NASDAQ:TSLA) has soared close to 2,000% over the past five years. It continues to be a hot investment, as car buyers become more focused on cleaner and greener vehicles. In January, the company announced that it delivered just under 500,000 vehicles during 2020. That was a 36% increase from the previous year when it delivered 367,500 vehicles. It’s a remarkable achievement, even as the coronavirus pandemic has caused millions of job losses in North America over the past year. Tesla’s revenue for 2020 totaled $31.5 billion and grew by 28.3% year over year. And there’s little doubt that the company will continue growing.

Another option for clean energy investors that’s on the TSX

If, for whatever reason, you don’t want to invest in Tesla or just want to stick to the TSX to avoid currency conversions, the good news is that there’s an attractive option out there: Ballard Power Systems (TSX:BLDP)(NASDAQ:BLDP).  Over the same five-year stretch, the stock has actually outperformed Tesla, and it has a strong correlation with the auto stock: 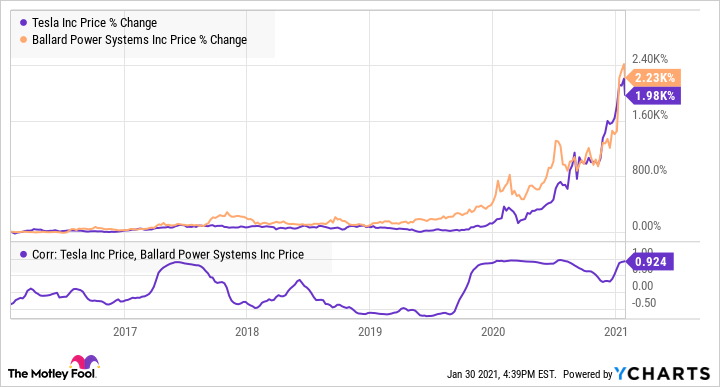 Ballard makes fuel cell products, and while they may not be popular with Tesla’s Elon Musk, it’s another way to invest in greener energy. Its products could prove vital to countries looking to meet their emissions targets. In January, Ballard announced that U.K.-based Arcola Energy would be purchasing one of its fuel cell modules that will be used in a passenger train to be deployed in Scotland — the first such train of its type. In December 2020, Ballard received an order from a Belgian company, Van Hool, for 10 fuel cell modules, which will be used to power buses in the Netherlands.

And these developments could just be the beginning, as the company’s CEO Filip Van Hool stated, “We are keen to deploy more Fuel Cell Electric Buses, powered by Ballard, in European cities. The successful integration of Ballard products into our buses, including the A330, has enabled progress toward commercialization of fuel cells in public transportation. We expect continued market penetration and growth of zero-emission fuel cell buses throughout the E.U.”

Investors will need to be patient

Tesla is much further along in its progress than Ballard is today. Over the trailing 12 months, Ballard has generated just US$118 million in revenue while incurring losses of US$47 million. It’s going to take some time for the company to grow its top and bottom lines. While countries are committed to being greener, it’s just not an overnight process. Scotland, for instance, is targeting 2035 for when it hopes to achieve zero emissions.

But with a new president in the U.S., one that’s going to push for greener initiatives, there could be more growth opportunities ahead for a company like Ballard. What’s exciting is that Ballard still has a lot of potential to grow with a relatively modest market cap of $12 billion, whereas Tesla’s US$752 billion valuation might limit how much upside that stock has left. Buying shares of Ballard today could set you up for attractive, Tesla-like returns in the future, but it’s going to require some patience.