Shares of BlackBerry (TSX:BB)(NYSE:BB) reached 52-week highs of $36 just a few weeks ago. Amid the flurry of retail buying that saw GameStop, AMC, and other high-risk stocks rise, BlackBerry also got a big boost in its share price. But was that just a one-time bump or can the stock get near those highs again?

Why another rally could happen this year

There’s a lot to like about BlackBerry’s business. It has high margins, it has many recurring customers, and it recently landed a deal with Amazon Web Services that could generate significant revenue, as the two businesses work on providing car manufacturers with some valuable metrics and data based on information they collect from a vehicle’s sensors. If that leads to other deals or there’s another development that can generate bullishness, it wouldn’t be surprising for BlackBerry to surge in value again. If retail investors have targeted it before, that could be a sign that it’s on their radars. And that makes the stock a possible target in the future, especially if there’s some good news to rally around.

Why the stock could be heading lower

On its own merits, BlackBerry probably isn’t worth being overly bullish on just yet. Sales in its most recent quarter totaled just US$218 million — that’s the second-lowest revenue number it has reported in the past five periods. It has also struggled to stay out of the red, failing to report a profit in the trailing 12 months. And with many competitors offering cybersecurity options out there, growth is by no means a guarantee for BlackBerry.

There are many question marks surrounding the company’s future, and until it can generate some consistent growth numbers, it’ll be hard for investors to take BlackBerry seriously as a top growth stock. And it’s evident from its valuation that investors simply aren’t willing to pay much of a premium for it. When comparing price-to-sales numbers, its multiple is far lower than other top tech companies on the TSX, including Shopify, Kinaxis, and Lightspeed: 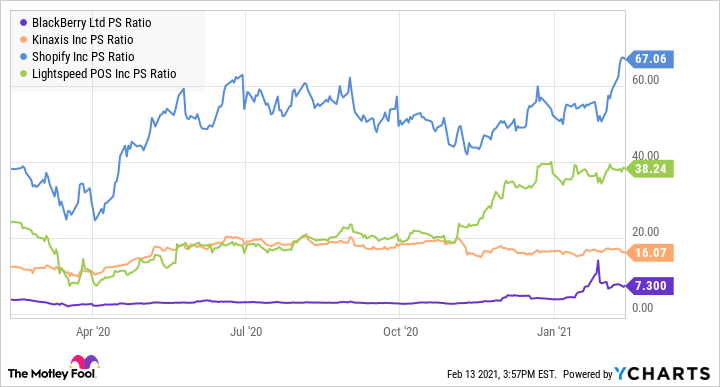 While this could suggest BlackBerry is cheap with respect to these stocks, their businesses have also generated much more growth and that’s likely a big part of the reason for the discrepancy in valuation.

Should you buy BlackBerry stock today?

Although the hype has died down a bit surrounding BlackBerry, it’s still trading at more than $16 per share. That’s double where it was to start the year. It wouldn’t be surprising to see the stock at least stay at this level for some time, especially since it was undervalued for a long time. It’s possible that BlackBerry steadily rises in value, but to expect it to double in value again from where it is right now may be a stretch. Without a huge announcement or development, it’s likely the stock has already hit its peak for 2021.

However, it can still make for a good long-term investment, as the business is showing signs of progress. But investors will need to be patient if they’re looking to earn a great return from this stock.

5G is one of the greatest arrivals in technology since the birth of the internet. We could see plenty of new wealth-building opportunities in 2021 that would potentially dwarf any that came before them.

5G has the potential to radically change our lives and society as we know it, but if you’re an investor, the implications are even greater — and potentially much more lucrative.

To learn more about it and its revolutionary potential to change the industry — and potentially your bank account — click on the link below to get the full scoop.