The COVID-19 pandemic wreaked havoc all over the world and also decimated the stock markets last year. Most major indices lost around 35% in market value between February and March last year. However, a few companies staged a stellar comeback and created massive investor wealth in the last 12 months.

Shares of GreenPower Motor (TSX:GPV.V)(NYSE:GPV) have risen 1,800% since April 2020. Despite its massive returns, the stock is trading over 30% below its record high. GreenPower is an electric bus and van company and the market for medium and heavy-duty commercial vehicles is expected to reach 50,000 by the end of 2025. 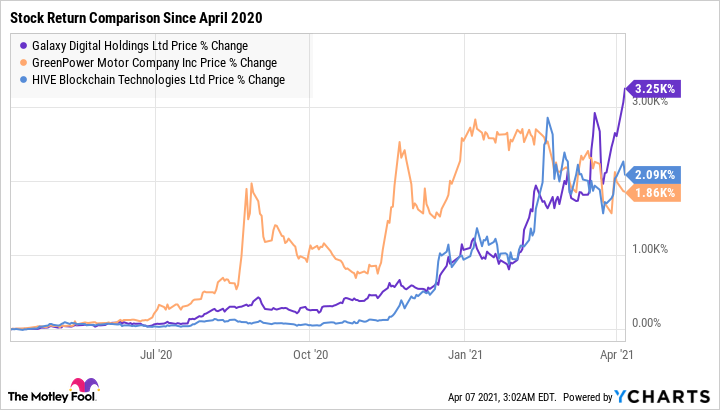 GreenPower lowers its manufacturing costs by using off-the-shelf components and subsystems. The company has not hired a direct sales force but instead sells its vehicles to Creative Bus Sales which is the largest network of bus retailers south of the border.

This partnership with third-party contractors allows GreenPower to operate under an asset-light model. Further, the Canadian company has spent just over $2 million in research and development since 2017.

After considering the growing pipeline and growth opportunity for EV school buses, GreenPower has doubled its production of these vehicles to 10 per month, suggesting the company will be able to generate $75 million in sales each year and the increase in production will increase this figure to $100 million.

The second stock on the list is HIVE Blockchain Technologies (TSX:HIVE), a blockchain company that has returned 2,100% to shareholders in the last year. HIVE is a Bitcoin mining entity which means its price will be closely related to the price of the world’s most popular digital currency.

Bitcoin prices have gained momentum on the back of institutional investments as well as widespread adoption among financial giants including Square, MasterCard, Visa, and PayPal. Investors need to understand that investing in HIVE Blockchain stock is as risky as investing in Bitcoin and other cryptocurrencies.

The market cap of HIVE stock fell by a staggering 98% between November 2017 and December 2019 and has since recovered to trade at current levels. As the crypto space is unregulated and highly volatile, HIVE stock prices will also fluctuate wildly given its beta of 5.5.

Shares of Galaxy Digital Holdings have gained an astonishing 3,250% in the last 12 months. The company is a diversified financial service and asset management innovator in the digital asset, cryptocurrency, and blockchain technology sectors.

It builds and manages digital asset quality products on behalf of clients. Galaxy Digital also invests in liquid crypto assets as well as in companies part of the highly disruptive blockchain industry.

Company CEO, Michael Novogratz said, “I am proud to share the results of Galaxy Digital’s transformational fourth quarter, as net comprehensive income increased over 1,100%, AUM increased over 98%, and counterparty trading volumes increased over 80%. That dramatic growth accelerated further into the first quarter, which we expect to be another record quarter.”

An investment of $1,000 in each of these three companies in April 2020 would now be worth a cumulative $64,000 today. While past returns don’t matter much, you can use this as a starting point in your research and analyze if these stocks have the potential to outperform the markets in 2021 and beyond.

Are you a fan of growth stocks?