Oil-weighted oil and gas producers are rallying due to higher oil prices. Here are three energy stocks that you can explore for your consideration. Strategically trading them could make you some big bucks for your retirement fund.

Enerplus’s (TSX:ERF)(NYSE:ERF) production this year is estimated to be 62% oil. Management estimates it will produce about 113,000 barrels of oil equivalent per day this year, which would translate to free cash flow of more than $450 million. In the near term, the company plans to allocate about 90% of its free cash flow to debt reduction after paying its dividend.

Management has a focus on generating free cash flow. It also has a long-term outlook that models the WTI oil price to be in the range of US$50-55 per barrel, which is reasonable. Under this scenario, it expects its liquids production to grow roughly 3-5% per year.

At $11.48 per share, the energy stock trades at roughly 3.8 times its cash flow and could appreciate about 58% over the next couple of years. Its yield of about 1.3% also adds to total returns. 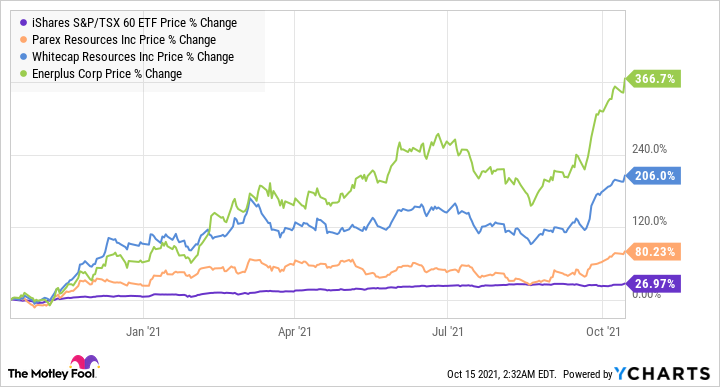 Whitecap Resources (TSX:WCP) is an oil-weighted oil and gas producer. Its production this year will roughly be 77% oil. Management estimates to produce 111,500 barrels of oil equivalent per day this year, translating to free funds flow of $634 million and a payout ratio of 52%. So, its 2.6% yield should be secure.

The company also provided projections for 2022, which it expects to be better than this year. Specifically, Whitecap anticipates production growth of 9%, free funds flow to improve significantly to $909 million, and a lower payout ratio of 47%. Further, it would be reducing its leverage ratio materially.

At $7.71 per share, Whitecap Resources trades at about 4.9 times its cash flow and could appreciate about 27% over the next 12 months.

Management models a baseline Brent oil price of US$55 per barrel, which it estimates would generate its cash flow of about US$400 million. That cash flow would be more than enough to fund capital spending for growth and its new dividend with cash flow left over for share buybacks. The energy stock’s 2% dividend yield is secure.

The reality is that since late January, the Brent oil price has been above the US$55 level. Consequently, the energy stock has elevated 46% year to date.

There’s no doubt that high oil prices play a big role in the continued rally of these energy stocks. However, oil prices are volatile and can be swayed by different factors like inventory, production, and demand changes. The current scenario is that economic reopenings are expected to help drive higher energy demand that could help keep oil prices high.

Just when re-opening efforts started to gain some steam, the new coronavirus variant has brought in a fresh set of…

What happened? Crescent Point Energy (TSX:CPG)(NYSE:CPG) stock rallied sharply on the TSX today. While CPG stock price opened with about…