Restaurant Brands International (TSX:QSR) — parent company of Burger King, Popeyes Louisiana Kitchen, Tim Hortons, and Firehouse Subs — has hired Patrick Doyle as executive chairman. Doyle is a legend for restaurant investors because he helmed the ship at Domino’s Pizza (NYSE:DPZ) as it sailed to a greater than 2,200% gain in just eight years.

In the past month alone, QSR stock has risen almost 11%. Will the good times keep rolling? Here’s what Restaurant Brands investors need to know.

When Doyle took over in March 2010, Domino’s was in the dumps. The business was ok — full-year revenue for 2009 only fell 1% from 2008. But the product was bad. So Doyle had the company redo its pizza recipe and launched an ad campaign admitting to its previous culinary shortcomings.

The result: Consumers absolutely loved Domino’s 2.0. In the first quarter of 2010, same-store sales (SSS) surged 14.3% in response to the better pizza — a gain that Doyle called “unprecedented.” For the year, same-store sales were up almost 10%. Domino’s new pizza continued driving that growth every quarter for the next decade.

Same-store sales growth was (and is) key for Domino’s for two reasons. First, restaurant companies typically have thin profit margins, but these can increase dramatically with greater sales volume. Consider that Domino’s is roughly 98% operated by franchisees. By increasing restaurant-level profitability through same-store sales growth, franchisees are kept happy. Moreover, franchisees are more motivated to open new locations.

From March 2010 through June 2018, Domino’s revenue only roughly doubled — franchised locations don’t add much to the franchiser’s top line. But franchise fees are higher margin than restaurant sales. Unsurprisingly, Domino’s net income nearly quadrupled over this time span. And earnings per share (EPS) jumped even higher because Domino’s was repurchasing shares. 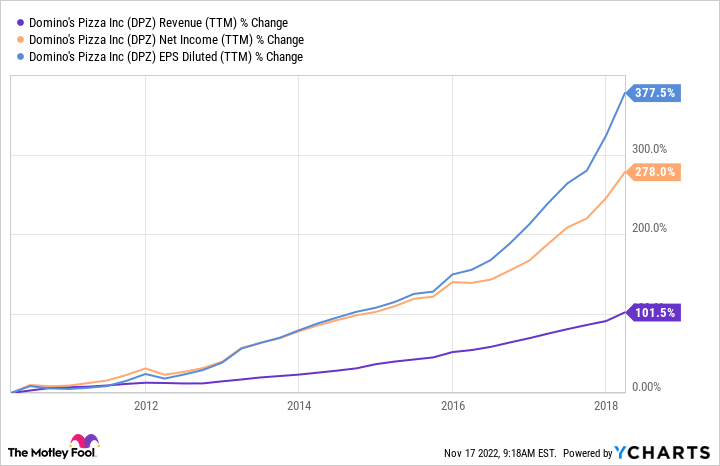 Finally, Domino’s Pizza stock also succeeded under Doyle because investors believed again. The stock traded at a price-to-earnings (P/E) ratio of about 10 at the start of 2010 — very inexpensive. By the time Doyle left, it traded closer to a P/E of 40. 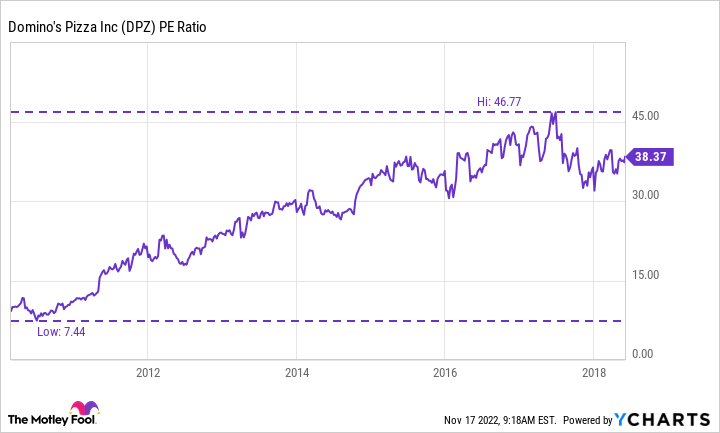 Is Restaurant Brands stock a buy?

In Restaurant Brands’ press release announcing his hire as executive chairman, Doyle said, “I am confident we can create one of the most compelling growth stories in the industry.” And Doyle’s money is where his mouth is. His compensation is tied to the stock price. And he personally invested $30 million with a five-year committed hold period.

However, for those hoping for greater than 2,000% gains in Restaurant Brands stock — like Domino’s — there’s an important caveat. Restaurant Brands is in better shape and has a better valuation than Domino’s in 2010. The company’s revenue, net income, and EPS are all up over the past five years. And the stock trades at a P/E ratio of almost 22 — a slight premium to the market’s average.

Therefore, some of the possible Domino’s-esque catalysts are off the table for Restaurant Brands stock. That said, it can still generate positive returns for shareholders. Here’s how.

Burger King is already quite large with over 19,400 worldwide locations. However, Tim Hortons, Popeyes, and Firehouse still have room to expand with only 5,400, 3,900, and 1,200 locations, respectively. Moreover, management says it would like to acquire another restaurant chain as well, which would provide another expansion opportunity.

Opening new restaurants will grow Restaurant Brands’ revenue. However, net income probably won’t grow at a much greater pace than revenue, unlike Domino’s. Back in 2010, Domino’s gross margin was low and able to expand with higher revenue. By contrast, Burger King’s margin is better, as seen below. Moreover, a big hindrance to margin expansion is Tim Hortons’ supply chain logistics, which are mostly company-owned. 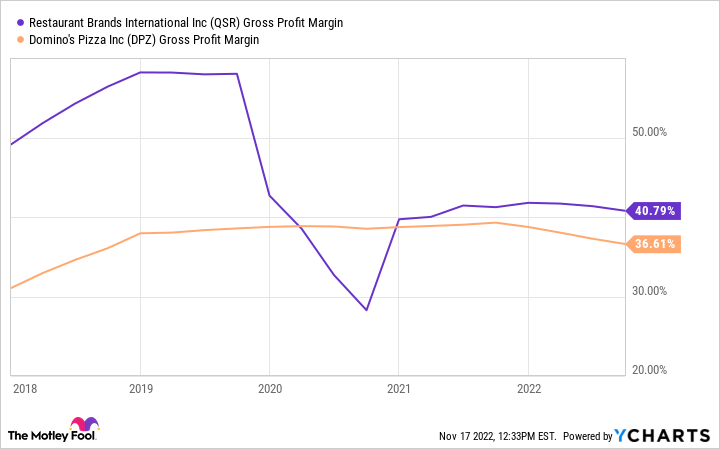 Doyle is a proven operator, and Restaurant Brands is lucky to have him. But this isn’t the turnaround opportunity that Domino’s was. The company’s revenue and earnings will likely rise, but probably not at a spectacular pace. Share repurchases and its high-yield dividend (currently 3.3%) should further boost shareholder returns, possibly even making this a market-beater over the long term. But my guess is that returns for Restaurant Brands will be more in line with the market average.

Is Restaurant Brands International Stock Worth Buying in February 2023?

After an impressive rally, does restaurant stock QSR have more room to grow, or is it already fairly valued?

Millionaire by 40: Top 4 Ways to Hit Your 1st Million