Canadian National Railway Company (TSX:CNR)(NYSE:CNI) stock was on a solid run up this year until last week when the railroad’s first-quarter results sent the stock crashing nearly 8%. With the stock now trading cheaper than rival Canadian Pacific Railway Limited (TSX:CP)(NYSE:CP), is this an opportunity or a signal of the worst to come? 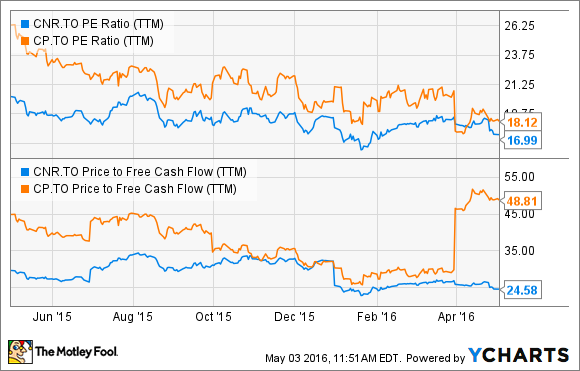 That massive gap in the price-to-free-cash-flow ratios makes Canadian National look like a bargain. The company is, in fact, generating greater cash flows than Canadian Pacific in terms of a percentage of its net income:

A higher free cash flow is better as a company pays out dividends to shareholders from its FCF, which is simply the amount of operating cash left after spending on maintenance and expansion programs. That said, at a price of 25 times, its FCF isn’t really cheap when you consider the weak business conditions Canadian National is battling right now.

What the bulls are banking on

The company’s first quarter was a strong one, with net income and earnings per share jumping 13% and 16% year over year, respectively. However, Canadian National’s muted outlook left investors wondering if its growth has stopped in its tracks. It now expects to earn flat EPS this year compared to an earlier guidance of a mid-single percentage growth. That doesn’t look as bad until you realize that Canadian Pacific expects its EPS to grow double digits this year.

Interestingly, Canadian National is trading at a forward P/E of only 12 times, indicating that analysts are projecting its EPS to grow next year. That may be backed by the ongoing strength in intermodal freight, and the U.S. automotive and forestry industries. Combined, the three markets made up almost half of Canadian National’s revenues in the first quarter.

It’s also encouraging to note that Canadian National continues to boast the best-in-class operating ratio–an indicator of management efficiency and a solid competitive advantage to have in the railroad industry.

Should you jump in right away?

I’d willingly pay a premium for a company that’s poised to grow rapidly. Sadly, that doesn’t seem to be the case with Canadian National right now, given the prolonged weakness in coal, oil, and fertilizer markets. Meanwhile, lower fuel prices are like a double-edged sword. While it lowers railroads’ expenses, it also hurts fuel surcharge revenue. Worse yet, low fuel generally gives truckers and shippers an edge over rail.

Don’t get me wrong: Canadian National remains a solid long-term pick. But I’d wait for its prospects to improve and prices to cool down a bit before putting my money in it.