If you’re bullish on energy, transportation, utilities, telecommunications, or water, what would you do? Buy stocks from respective sectors, right? Or consider Brookfield Infrastructure Partners L.P. (TSX:BIP.UN)(NYSE:BIP). Now, this is one heck of a company that buys distressed assets across the above sectors, turns them around into money-making machines, and passes on a major chunk of profits to shareholders.

In other words, Brookfield offers both capital appreciation and dividend-growth potential. With the stock finally showing signs of life after months of pressure, this could be your golden opportunity to scoop up the 4.7% yield stock before it gets too hot for your money. Here’s why.

Brookfield Infrastructure was originally owned by Brookfield Asset Management Inc. (TSX:BAM.A)(NYSE:BAM) until it was spun off as a standalone company in 2008.

You just have to look at the growth in Brookfield Infrastructure’s revenue, net income, and cash flows since to understand how far the company has come in just 10 years. 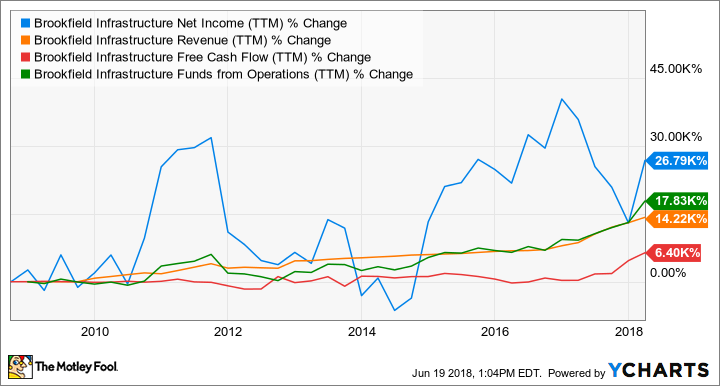 Those mind-boggling returns, of course, aren’t a fluke, as a mix of several factors has contributed to the company’s growth. In fact, the company outperformed Brookfield Asset Management by staggering margins in the past decade.

Brookfield Infrastructure typically buys “defensive” assets, such as power transmission lines, telecom towers, toll roads, railroads, and gas pipelines. Thanks to that, as much as 95% of the company’s adjusted EBITDA (earnings before interest, tax, depreciation, and amortization) comes from regulated or contracted sources, which eliminates much of the volatility in its top and bottom lines.

Over the years, management has proven its mettle in acquiring assets across the globe at reasonable valuations and scaling them to profitability. As assets mature, the company disposes them off to reinvest proceeds into fresh asset purchases.

Brookfield Infrastructure shares fell out of favour with investors beginning this year, as the market appears to have become wary of rising interest rates that could dent the company’s margins, as debt is an important source of funding.

Yet Brookfield Infrastructure earned enough in operating profits in the trailing 12 months to cover its interest expenses almost four times over.

In its most recent quarter, Brookfield Infrastructure reported the following numbers:

Utilities contributed the most to the company’s FFO thanks to its recently acquired natural gas transmission assets in Brazil. Meanwhile, Brookfield Infrastructure sold off an electricity transmission business in Chile, netting US$1.1 billion.

That’s because Brookfield Infrastructure has grown its dividends at a solid compound annual rate of 11% since 2008. Its 10-year streak makes the stock a top-class Dividend Aristocrat (a company that has increased is dividend for at least five consecutive years).

Going forward, management aims to payout 60-70% of its FFO in dividends and is targeting 5-9% growth in annual dividends.

Stock is giving out a strong buy signal now

Spending in infrastructure could rise exponentially in coming years and decades to serve the needs of a growing global population. That means Brookfield Infrastructure has a huge growth opportunity, especially as it expands its global footprint. Support from Brookfield Asset Management — it is a key stakeholder and helps manage the company and identify potential acquisitions, among other things — should act as a buffer.

For the potential, Brookfield Infrastructure stock is still trading at a single-digit price to FFO and yields 4.7%, making it a solid stock to buy and hold for the long term.