If you’re an oil and gas investor, you’re probably frustrated, and rightfully so. Oil prices have been rising over the past year, but stocks haven’t necessarily followed that path, and many have continued to decline. The chart below puts into perspective how big of a disparity there has been: 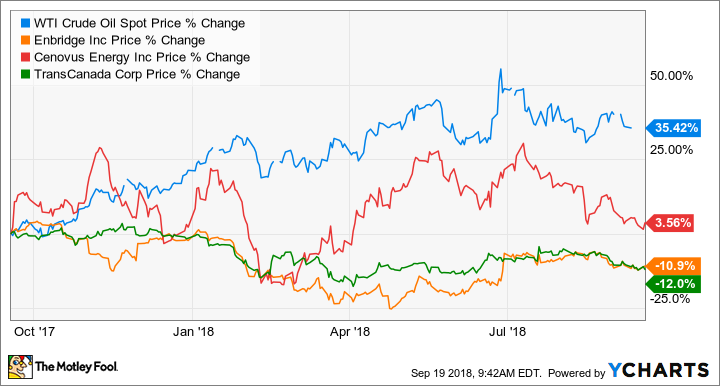 This is not to say that we should see the stocks move in unison, as there are many different factors that could impact share price that have nothing to do with oil prices. In the past, what we’ve seen, however, has been a much different story: 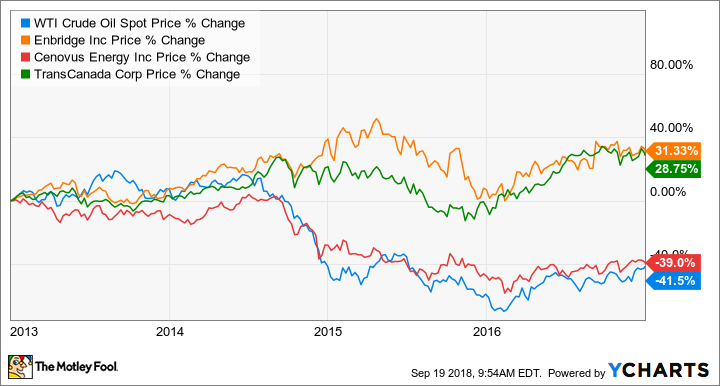 From 2013 through to the end of 2016, we saw a pattern where the performance of oil prices was typically worse than the same three stocks that have since underperformed.

What does this mean?

What these charts tell me is that there’s still some hesitation on the part of investors and companies in oil and gas. For one, while oil prices have indeed been rising, it’s been primarily as a result of cuts to production, although that is going to change. And while production may not be at optimal levels, the concern is that once that happens, we could be right back to where we started, with too much supply.

That explains why companies are reluctant to pull the trigger on any big investments and why the industry isn’t taking off the way we might have expected under the promise of higher commodity prices.

The political climate in Canada is also not doing oil and gas stocks any favours. With numerous pipeline issues, including the cancellation of the Energy East project and more recent issues with the Trans Mountain pipeline, it shouldn’t be a mystery why investors are hesitant, particularly when it comes to Canada.

Until we see a more oil- and gas-friendly government in place with regulations that will be conducive to growth, this pattern will likely continue.

As much as stocks like Enbridge (TSX:ENB)(NYSE:ENB) and Cenovus Energy (TSX:CVE)(NYSE:CVE) continue to be bargain buys, with the industry being full of bears, it simply doesn’t matter. After all, a higher price of oil is useless if pipelines can’t be built to transport more of it, and that will translate into underperforming stocks.

What should investors do?

Both Cenovus and Enbridge have been able to make it through what looks to have been the worst of times, and investors that are willing to hold tight during this downturn could be rewarded in due time. The industry has been very cyclical over the years, and once it gets going again, these stock prices could take off.

Enbridge offers investors a solid dividend, while Cenovus is trading at a hefty discount to its book value, and as a result, both stocks could offer great returns over the long term.

There’s still a fair amount of risk in the industry today, but the demand for oil isn’t going anywhere anytime soon, and that should keep investors hopeful that we are due for a turnaround.