Oil prices are rising again, with West Texas Intermediate starting to climb over US$73 this week — the highest it has been since late 2014, when the downturn in oil was well underway: 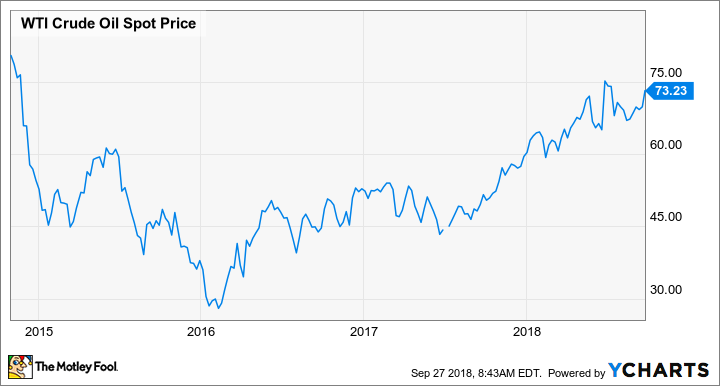 With the U.S. set to impose sanctions on Iran in November, we could see lower levels of supply, and that could further push up oil prices. And while other countries could pick up some of that shortfall, it might be a challenge to do so. We’ve already seen some OPEC members hampered by their own supply issues, meaning others had to ramp up production already.

Why does this matter?

Skeptics will say that the price of oil has been increasing for a while, and it has had minimal impact on Canadian oil and gas stocks. And while that’s true, oil prices have been stuck in a range for some time, and if they are able to stay above US$70 for a prolonged period, that could be a very good sign for investors and producers as well.

Currently, there’s still a lot of hesitation from oil and gas producers to invest or take on any projects simply due to the poor political climate in Canada as well as the uncertainty relating to oil prices and the fear that they may drop back down. We’re seeing companies be a lot more hesitant out of fear of getting burned.

Earlier this month, we heard Suncor Energy (TSX:SU)(NYSE:SU) CEO Steve Williams suggest that in the long run, the company would remain unlikely to take on more expansion in Canada without seeing progress on pipelines like the Trans Mountain. The government is currently working towards a solution for the Trans Mountain, and that will be crucial in order to win back the trust of Suncor and other big players in the industry.

For some, while political risks might still be present, the prospect of a higher dollar for oil simply might be too appealing to turn down. It could also lead to higher prices that companies can lock in at. Cenovus Energy (TSX:CVE)(NYSE:CVE) is an example of a company that has been a bit aggressive in its hedging strategy and underscores just how valuable locking in and getting some consistency for oil and gas producers is.

While Cenovus has vowed not to be as aggressive going forward, its peers may see a heightened price of oil as an opportunity to lock in before a correction takes place.

Many oil and gas stocks have suffered for years now, but with commodity prices rising and pressure on the government to find a solution for pipelines like the Trans Mountain, there appears to be a path for the industry to rally and for investors to become more bullish about its prospects.

That makes stocks like Suncor and Cenovus particularly attractive today, since their share prices are still relatively low, and if we do see the price of oil remain high or a positive development regarding the Trans Mountain, we could see a lot of buying activity.