In times of market volatility, it is best to load up on assets that are best in class. Regardless of sector, those that have a reliable history of performance and a strong outlook will outperform. It is for this reason Toronto Dominion Bank (TSX:TD)(NYSE:TD) is still my top banking stock for 2019.

This is not to say the other Big Five are bad investments. I have made the case for an investment in Canadian Imperial Bank of Commerce for its high yield and Bank of Nova Scotia for its undervaluation. However, TD Bank is still the safest and most attractive stock in the sector.

All of Canada’s banking stalwarts took a hit this past year. On average, the Big Five lost 12.19% of their value. Outperforming and leading the way once again was TD Bank. This has been the norm over the past 10 years. In 2018, it only lost 7.94% of its value — the lowest of the group. It has similarly outperformed and led the pack over the past two-, five-, and 10-year time frames.

Here is the 10-year chart in terms of percentage price change. As you can see, TD Bank has averaged a compound annual growth rate of 19.7% over this time frame. 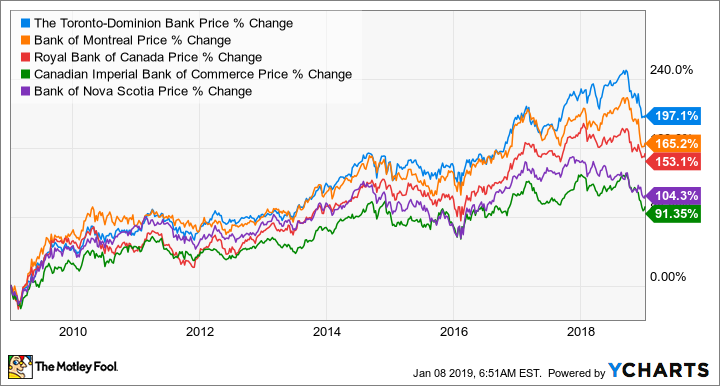 The company is also cheap. Trading at 10.3 times earnings, TD Bank is trading below its historical average of 12.6 times earnings. In fact, the bank hasn’t been this cheap since the financial crisis. Canada’s banks always return to trade in line with historical averages, and a return to a P/E ratio of 12.6 is likely. This would imply 12% upside from today’s share price.

Did you know TD Bank has one the highest expected growth rate among its peers? Analysts are expecting 12.15% average earnings-per-share growth over the next five years. As such, its P/E-to-growth (PEG) ratio is currently sitting at 0.90 — the lowest among Canada’s Big Five. A PEG under one signifies that its share price is undervalued as it is not keeping up with expected growth rates.

To top it off, TD Bank is also a Canadian Dividend Aristocrat with an eight-year dividend-growth streak. It has averaged double-digit dividend growth over the past five years, which is tops among the biggest banks in Canada.

Don’t expect it to slow down. It has the lowest payout ratio of the group at 44.61% and it drops to 38.59% based on forward earnings. As such, investors can expect a higher than normal dividend-growth average over the next few years.

TD Bank is, simply put, a best-in-class bank. It has a history of outperformance, the highest expected growth rates, and the fastest-growing dividend in the sector. Now is your chance to pick it up at valuations not seen in over a decade. Don’t pass it up.