2018 saw its fair share of dividend cuts, the most high profile of which was likely that of Corus Entertainment, which slashed its payout by roughly 80% in June. Prior to the cost-saving cut, Corus stock boasted a yield of nearly 20%.

Another notable cut took place in December when AltaGas chopped its dividend by more than 50%. At the time, the stock’s yield reached into the mid-teens and its payout ratio was far in excess of 100%.

Dividend cuts are the worst nightmare of income investors and can hammer share prices. Conversely, as in the case of AltaGas, removing an unsustainable payout can lift a stock and place it on a trajectory toward renewed success.

Let’s take a look at a few stocks that I think might cut their dividends in 2019. Further, we will take a look at how such cuts may impact their respective stocks. 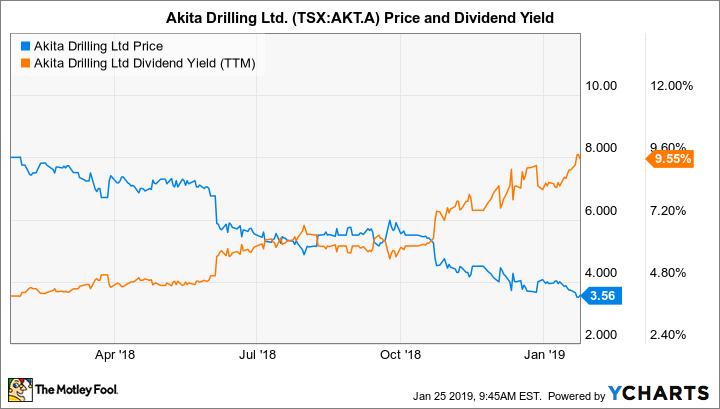 Akita, a contractor in the oil and gas industry, has been struggling with profitability since 2015. Meanwhile, the company has not cut its generous payout, which now represents a yield of more than 9%.

Trading at around $8 one year ago, Akita’s share price has been in continuous decline and now sits below $4.

It is hard to gauge to what extent the distribution has cushioned Akita’s fall, but I can’t imagine that many investors expect the company to maintain the current dividend with no earnings and little prospect of an oil recovery in sight.

Formerly MacDonald, Dettwiler and Associates, Maxar is a once high-flying aerospace company that has now come crashing down to Earth. With the precipitous decline of the value of its stock, Maxar’s yield has shot above 20%.

Those following the company might recall Spruce Point Capital’s scathing report in August, which criticised Maxar’s accounting practices and recommended the total elimination of its dividend.

In a sense, a dividend cut from Maxar would all but confirm Spruce Point’s suspicions about the quality of the company and would potentially have a negative impact on the stock. That said, much of that pessimism has already been reflected in the price of Maxar’s stock, so there may not be much downside left.

Like Akita, Ensign has suffered as a result of weakness in the price of oil. The company currently runs a loss with revenue that is less than half of what it was in 2014.

At its current dividend rate, Ensign pays over 9%. To avoid further erosion of its book value, the company would do well to trim its dividend to preserve capital while commodity prices remain depressed.

Investors can expect the same result as we saw in December, when Cardinal Energy announced its dividend adjustment; the stock took a beating. Long term, however, removing the burden of onerous payments to shareholders will give the company more financial flexibility going forward.

The moral of the story

As 2018 demonstrated, with great yields comes great uncertainty. For 2019, keep in mind that not all dividends are created equal and some can even vanish into thin air.

Fool contributor James Watkins-Strand has no position in any of the stocks mentioned. AltaGas and Maxar Technologies are recommendations of Stock Advisor Canada.