The Motley Fool Canada » Investing » Should You Buy Canada Goose (TSX:GOOS) Ahead of Earnings?

Canada Goose Holdings (TSX:GOOS)(NYSE:GOOS) is going to release its year-end results on Wednesday, May 29. The stock has fallen more than 11% over the past three months, and with earnings around the corner, it might be a great time to buy.

The company is coming off a very strong Q3 that saw sales just fall short of $400 million. Canada Goose has proven to be one of the best growth stocks on the TSX. Last quarter it also saw an improvement to its gross margin as a result of a growing direct-to-consumer (DTC) segment. However, despite the strong performance, the stock not only didn’t get a boost, but it also went on a sharp decline following the release of the results.

At that time, the share price was climbing and was hovering near $80. This time around, it’s nowhere near that and that might give it more of an opportunity to jump on another strong performance. The one wrinkle in all of this is the impact that China has on the stock. Last year, we saw Canada Goose crash as a result of a call to boycott the company related to a scandal involving Huwaei.

It was on the verge of reaching $100, and it has never been able to get back to those levels since then. And while I wouldn’t count on it getting there after it releases its Q4 results, an earnings beat could certainly set it back onto that trajectory.

Key numbers to watch for in Q4

There are two key numbers I’ll be looking for when the company releases its results, and that’s sales and gross margin.

We know that with the company’s expansion, it’ll likely see its operating costs rise. However, if it continues producing strong sales growth at high margins as well, that will likely mean that the DTC segment is continuing to show strength. It’s one thing for a company to be able to increase its sales, but to do so while also improving its margins isn’t something you see often.

Canada Goose has generally done well when it comes to beating earnings, and I’d expect nothing less for its Q4 results. With the stock not being able to generate much momentum over the past few months, Canada Goose’s share price could be overdue to break out soon. And while the stock may be a bit expensive, compared to another big growth stock, it’s actually a bit of a bargain, especially if we look at price-to-sales: 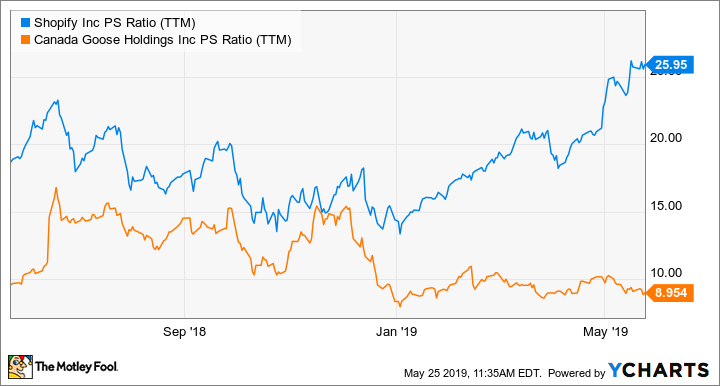 We’ve seen Canada Goose’s share price rise and fall very quickly as a result of earnings in the past, and I expect we’ll see the same happen this week. Which direction it goes in, however, is the real question. Given that the stock has seen strong support at $60 for much of the past year, and with the share price not making any big gains lately, there looks to be a lot more potential upside than there is risk that the stock will see a big correction this week.