Home » Investing » Dividend Stocks » 5 Years Since the Downturn, Is There Any Hope Left for Today’s Oil & Gas Industry?

The oil and gas industry has been in a downturn since 2014 and sadly, it still hasn’t really recovered. Many companies have gone under during that time, and those that haven’t have had to find ways to become more efficient by reducing staff and overhead. In short, it’s been a rough ride for the industry.

When I was working there a few years ago, I remember my company’s president, who was near retirement at the time, saying it was definitely more than just cyclical. Back then, it was already one of the longest and worst downturns he had seen — definitely worse than normal.

Unfortunately, the situation hasn’t gotten much better since then. Rising oil prices haven’t been enough to help the industry and a big part of the reason is political.

There’s growing resistance from environmental and indigenous groups to prevent pipelines from being built. Climate and other issues have made the oil and gas industry a target for many.

While there’s no doubt that demand for oil is not going anywhere today, we are seeing more of a movement toward electric cars and cleaner sources of energy. The transition might not happen for decades, but it does cast a pall over the long-term future for the industry.

Even if we see more pipelines approved, the peak for the industry has likely come and gone. Companies can no longer rely on high oil prices to keep their financials profitable; they have to be efficient and in control of their spending.

What’s happening isn’t a downturn anymore — it’s just the new normal. While OPEC production cuts may have a set end date, I’d be surprised if they were ever lifted for more than a brief period. Conditions in the industry have changed, which makes oil and gas stocks risky buys today.

As well as a stock like Enbridge Inc (TSX:ENB)(NYSE:ENB) has done in recent years, investors aren’t jumping on board to buy shares of the company. Despite showing lots of consistency over the years as well as revenue growth, Enbridge’s stock has struggled to rise in value.

Over the past two years, the stock has fallen 8%, and although it trades at a very reasonable 1.5 times book value and 21 times earnings, it hasn’t seen the bullish activity you’d normally expect of the stock. 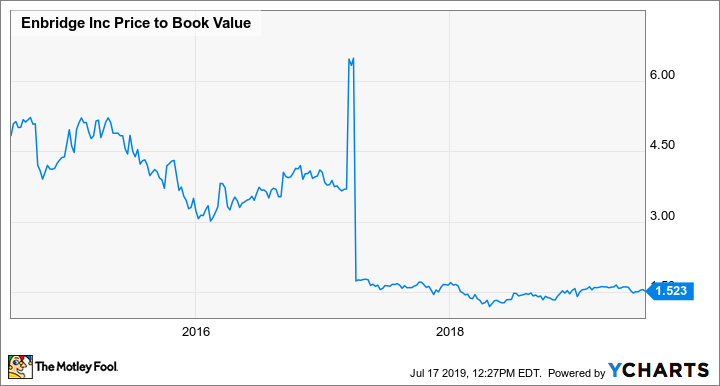 Investors have clearly adjusted the premiums that they’re willing to pay for oil and gas stocks, even in one of the strongest in Enbridge. It’s an indication that there’s simply too much risk involved, especially when you can invest in growth stocks that could produce much stronger returns.

Even its impressive dividend isn’t enough to get investors excited about Enbridge, as the stock only briefly rose above $50 this year and has reached a lot of resistance at that price point.

Oil and gas is nowhere near where it was back in 2014, and it may never be. Unless you’re looking for a good dividend, there’s unfortunately little reason to invest in a stock like Enbridge today.

Even if we see some progress in the industry, investors have been badly burned and would likely be very hesitant before giving it another chance.

Fool contributor David Jagielski has no position in any of the stocks mentioned. The Motley Fool owns shares of Enbridge. Enbridge is a recommendation of Stock Advisor Canada.