It’s not as if the first generation of Portal devices was a hit. The original models were pannedÂ as overpriced single-purpose gadgets with potential privacy violations waiting to happen. Yet Facebook (NASDAQ: FB) has decided it’s a good idea to continue pushing deeper into consumer hardware.

The new additions are Portal, Portal Mini, and Portal TV. The flagship Portal is priced at $179, down from the first-generation Portal’s $199 price tag. It has a 10-inch HD display that is comparable to the original version. The smaller Portal Mini costs $129 and features an 8-inch display. Both devices can work in either landscape or portrait orientations.

The Portal TV, which had been previously rumored, sits in the middle in terms of pricing at $149. It’s designed to be plugged into a TV via HDMI and then placed above or below the screen. For all Portals, Facebook continues to use its Smart Camera technology to track subjects around a room to zoom in and keep them in frame, while Smart Sound focuses the audio on whoever is speaking.

The devices are voice-activated with the command “Hey Portal,” and users can apply various augmented reality (AR) video filters in real time. Amazon Prime Video is also supported, and other video-centric and music apps can be downloaded. Facebook is also adding both WhatsApp and Messenger video calling, with WhatsApp calls being end-to-end encrypted. 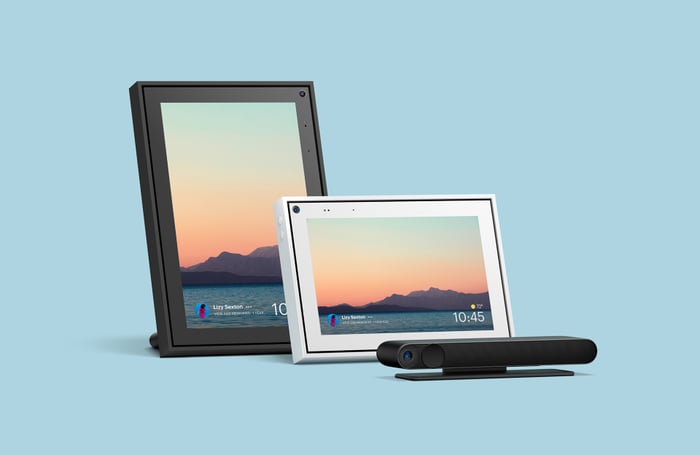 Portal and Portal Mini ship on Oct. 15, while Portal TV will launch on Nov. 5. Any two Portal devices can be bundled to score a $50 discount. Facebook is keeping the larger Portal+ from last year in the lineup, cutting the price to $279.

Of course, the announcement will renew privacy concerns that Facebook is preemptively attempting to address. The company notes that its Smart Camera and Smart Sound technology are all processed locally on the device instead of on Facebook’s servers. All of the new devices also include a physical camera shutter for stronger privacy protection, which will also disable the microphone and display a red light to notify users that the sensors are off.

Facebook will use human reviewers to tweak the accuracy of the voice recognition, a fairly common practice employed by most tech companies that has created privacy backlash. Users can opt out of voice storage, in which case audio clips are not stored or reviewed.

Much like the first-generation Portals, the new devices are probably also doomed. Facebook hasn’t even come close to overcoming its poor privacy reputation; an exposed Facebook server compromised over 400 million user phone numbers literally two weeks ago. Until the largest social networking company on Earth starts to actually take privacy seriously, not many people will feel comfortable putting Facebook cameras and microphones in their homes.