Maple Leaf Foods (TSX:MFI) stock has fallen by roughly a third since August. Is it a no-brainer buy or a value trap? Let’s explore!

Maple Leaf Foods is a consumer packaged meats company that was founded in 1927. Its popular brands include Maple Leaf, Schneiders, and others.

Michael McCain joined the company as president and COO in 1995 before taking on the CEO role in February. So, he has tremendous experience in the space.

Maple Leaf Foods grows organically and by acquisitions. In the last reported quarter that ended on September 30 (and was reported on October 30), the company increased sales by 5.4% driven by growth in both its meat and plant protein businesses. Including acquisitions, sales increased by 13.8%.

Furthermore, Maple Leaf began a stock-buyback program in late May, which lasts for a year; during this period, it can buy back up to 7.5 million common shares for cancellation, which represents up to 6% of its outstanding shares.

In the first nine months of the year, the stock didn’t buy back any shares. With more than $70 million of cash and cash equivalents at the end of Q3, it has the dry powder to start buying back shares at the current basement prices!

Rebound in sight for the huge stock decline

The bottom-line results for the third quarter were terrible. Earnings fell off a cliff: net earnings declined by half and adjusted earnings per share dropped 90%.

The primary culprit was a negative impact from China, Canada’s third-largest export market for pork, suspending the import of Canadian pork that lasted roughly for four months. Thankfully, that’s over. Therefore, Maple Leaf’s earnings should see a marked improvement over the next few quarters.

Assuming the company’s earnings rebound to 2018 levels fairly quickly, the stock can trade at about $29 per share again for roughly 25% upside potential.

Analysts are even more bullish on the stock. Their 12-month average price target is $33.40 per share, which represents nearly 44% upside potential!

It has been more than 20 years since Maple Leaf Foods stock offered a high yield of 2.5%, which suggests the stock may be a super bargain today. 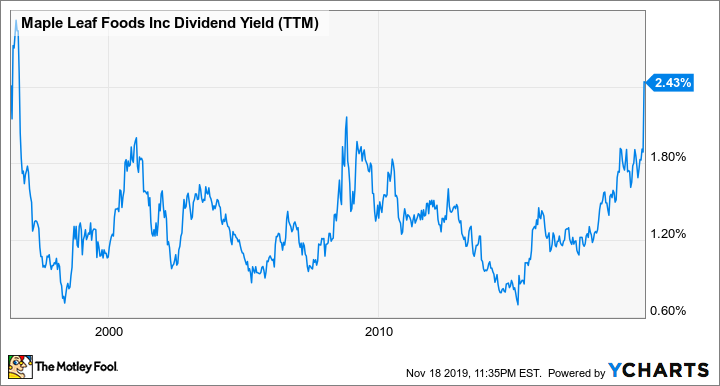 The stock has increased its dividend every year so far since 2015. Undoubtedly, its payout ratio will be outrageously high this year. However, the company’s earnings should rebound meaningfully over the next few quarters and reduce its payout ratio in the process.

According to its usual schedule, the company will announce a dividend increase in late February. Interested buyers can be cautious and wait for the dividend announcement before considering a purchase. However, by that time, the stock may be trading much higher.