This stock upset shareholders and index funds last year when it announced plans to reincorporate in the United States. Canada-only index funds will need to sell out of the shares, forcing them to take substantial capital losses on the investment. There were rumours that the shareholders wouldn’t vote in favour of the reorganization, but the opposition made up only a small portion of the voting shareholders.

This week, Encana (TSX:ECA)(NYSE:ECA) announced that its shareholders had voted to approve the reorganization in the United States. The stock had been underperforming drastically on the TSX in the past decade. Company leadership believes they can attract higher levels of passive investment by moving its incorporation over to the United States. 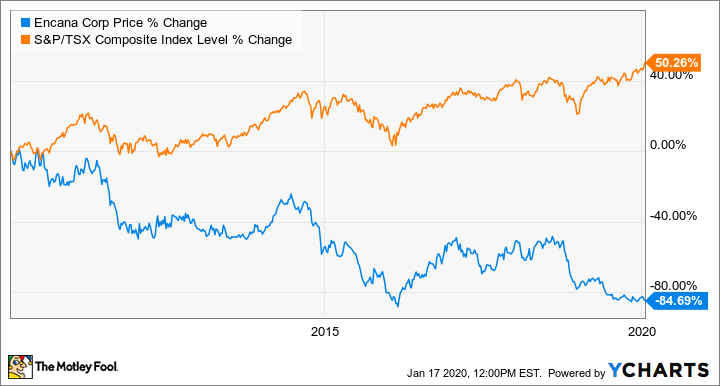 The company will rebrand under the name Ovintiv and exchange one share of Ovintiv stock for five shares of Encana stock. The company leadership expects the share consolidation to improve the comparability of shares with U.S. peers. The reduction in shares outstanding will result in market value approximately five times the current price, while your overall Encana portfolio should see no net gain or loss from the share consolidation.

Of course, reorganization in the United States has many tax implications for Encana shareholders domiciled in Canada. For some Canadian shareholders, it may be better to exit Encana positions altogether rather than dealing with the tax burden of foreign-earned dividend income and capital gains. What you should do entirely depends on your personal tax situation.

A good accountant can advise you of the benefits and drawbacks of each option. You may also be able to find good information on the Canada Revenue Agency’s website. Encana has also published some light guidance on the tax bill implications of the reorganization.

According to an informational PDF that Encana published on October 31, 2019, the U.S. may withhold between 15% and 30% on dividend payments, depending on the shareholder’s eligibility under the Canada-U.S. Income Tax Treaty. Most Canadian shareholders will qualify for the lower 15% tax rate as part of the treaty.

As well, Canadian shareholders will want to consider the relative tax advantages from the Canada Revenue Agency between different types of savings accounts. Encana investors in the TSX may want to invest directly in the U.S. New York Stock Exchange-traded shares in a Registered Retirement Savings Plan (RRSP). U.S. stocks in RRSPs are generally exempt from paying U.S. withholding tax as long as the shares are held in a U.S. exchange.

Encana currently offers shareholders an annual dividend yield of 1.84%, which hardly makes up for the poor stock price performance on the exchange. As far as energy stocks go, these days are desperate for the comparatively disadvantaged North American oil industry. With such low historical returns, Canadian shareholders may be better off sticking to Canadian stocks versus dealing with the tax implications of the company’s move to the United States.