Shopify (TSX:SHOP)(NYSE:SHOP) has generated impressive returns for investors over the years, but the stock may be running out of steam. Its valuation usurped Royal Bank of Canada earlier this month, as it became the highest-valued stock on the Toronto Stock Exchange. For a company that doesn’t generate profits, it’s an amazing accomplishment.

However, it’s also a reminder of how far Shopify’s come over the years and why buying the stock right now may be dangerous. With the economy headed for a recession and unemployment levels rising, consumers are going to have less money to spend on Shopify’s platform. Most industries will suffer as a result of the downturn, and while Shopify may still be doing well now, it’s not immune to the effects of COVID-19.

That’s why, as strong as its trajectory is right now, it’s unlikely to continue. Shopify’s valuation has gotten bloated to the point where it’s hard to miss the bubble that’s been forming of late: 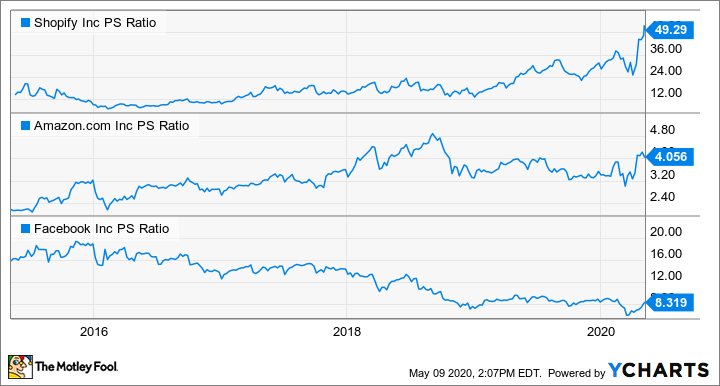 Even among some of the top tech stocks in the world, Shopify’s valuation is at the high end relative to its revenue. That’s why investors are better off looking at other up-and-coming stocks to invest in — ones that have more potential to increase in value.

A tech stock with plenty of growth left

One stock that looks to be a better buy today is Kinaxis (TSX:KXS). The tech stock’s valuation of around $4.5 billion is nowhere near Shopify’s gargantuan +$110 billion market cap. And 2020 has been a great year for Kinaxis, a company that helps companies improve their supply chain decisions. With supply issues a real problem due to COVID-19, there’s an increasing need for Kinaxis’s services.

The company released its first-quarter results on May 6, and its president and CEO John Sicard noted that “even in these challenging times, our sales pipeline grew overall, we continued to expand relationships with customers, and we won several new customers, including one of the world’s largest consumer product companies.” Kinaxis’s total revenue in Q1 increased by 15% from the prior-year quarter to $52.8 million.

Another important way that the company’s different than Shopify — it’s profitable. Kinaxis has consistently reported a profit in each of the past 10 quarters, and in most of those instances, its profit margin was above 10%. Shopify, meanwhile, regularly posts net losses, and only once during the past 10 quarters has it squeaked out a profit, and even then it was barely above breakeven — at a profit margin of just 0.15%.

While Kinaxis is getting more expensive as its share price continues to rise, it’s still a cheaper buy than Shopify with respect to its price-to-sales ratio:

Both of these tech stocks have done very well in 2020. But one has a lot more potential to generate stronger returns for investors from here on out — and it’s clear that stock is Kinaxis. It’s growing in popularity and its share price is likely to continue climbing, while Shopify may be due for a correction.