This is interesting because Saudi Arabia is a cooperative competitor of North American oil. Saudi Aramco is an energy firm in Saudi Arabia that recently went public. In response to the decrease in demand from the COVID-19 pandemic, Saudi Arabia began a price war with Russia.

Energy companies in Latin America and the Middle East can produce a barrel of oil at a lower cost, or more efficiently than North American companies. Thus, foreign energy firms can sell oil at lower prices than Canadian competitors. Needless to say, the price war hurt companies like Canadian Natural Resources and Suncor.

Because Saudi Aramco and Russia initially refused to cut oil production, oil fell (temporarily) to historic lows at less than $0 per barrel at the end of April. Storage fees and other concerns led to the negative price of oil.

Oil prices rebounded during the months of May and June following production compromises between Saudi Arabia and Russia. As of June 17, the price of the OPEC basket and WTI crude rest at around $36.75 and $37.88 per barrel, respectively. Meanwhile, the price of Canadian crude is $27.60 per barrel.

Should you buy this energy stock?

You shouldn’t buy an energy stock just because the Saudi Sovereign Wealth Fund decided to invest in it. You have to look at other factors, like the historic performance of the asset. 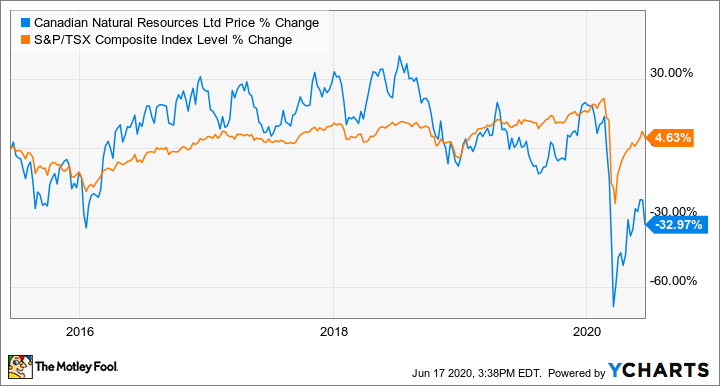 Overall, Canadian Natural Resources hasn’t consistently outperformed the S&P/TSX Composite Index. Nevertheless, there have been some periods of upward momentum where the stock has fared better than the index. This period was from 2016 to 2019, coinciding with the recovery in oil prices from the surge in supply after the world lifted sanctions on Iranian oil.

Therefore, investors can learn from this period of index outperformance that timing really does matter when it comes to purchasing shares in oil stocks. Now that the company is substantially underperforming the index by around 37.6%, now might be a good time to buy on the dip. Even better: the Saudi Arabia Sovereign Wealth Fund agrees, and the entity is related to a major competitor of Canadian Natural Resources.

The Saudi Sovereign Wealth Fund has excellent taste in Canadian oil stocks. It was Mathieu Litalien, another Fool contributor, who first noted in March that these were the top two energy companies on the TSX:

Honestly at this point, I would not touch any oil stock asid efrom $SU and $CNQ. What a nightmare! #blackmonday #stockmarket https://t.co/nnimrUCJDC

At the beginning of March, when the stock market first began nose-diving in response to the COVID-19 pandemic and the oil price war, Mathieu Litalien said that he would avoid all TSX energy stocks except for Suncor and Canadian Natural Resources.

His reason is that Canadian Natural Resources faces the lowest costs in the Canadian market. Looking at free cash flow, Litalien noted the record $4.6 billion in 2019. Due to the already stellar cash flows at CNQ, shareholders had no reason to expect a decrease in dividend payments, despite the temporary geopolitical setback.

There is no such thing as a riskless investment. That being said, you may want to take a closer look at Canadian Natural Resources. It may not be riskless, but it could definitely be a great stock to buy right now.