In a surprise move on Monday, Brookfield Asset Management (TSX:BAM.A)(NYSE:BAM) and its institutional partners proposed to acquire 100% of Brookfield Property Partners (TSX:BPY.UN)(NASDAQ:BPY) units that it did not already own. The deal prices BPY at US$5.9 billion for US$16.50 per unit.

Actually, the news may not be so surprising. BPY shares were cheap. Last year, BAM/BPY backed up the truck and bought back at least US$561 million worth of BPY shares.

After all, BPY’s end-of-Q3 book value was US$26.80 per unit. The public units still trade at a discount of 37%. Notably, the book value slipped 6% from a year ago. There’s the possibility that the ongoing pandemic could further pressure BPY’s book value.

Moreover, BPY tends to trade at a discount to its book value and has been trading at a bigger and bigger discount, as shown below. 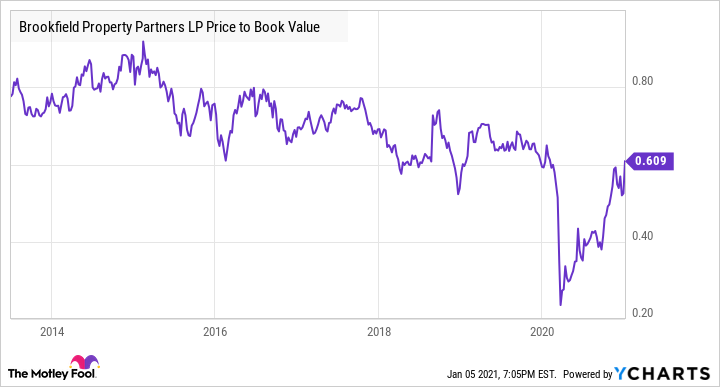 However, shareholders don’t necessarily need to sell out of their position. BAM provides three options in this deal. And investors can choose a mix of the three options.

In light of BAM’s buyout announcement, BPY stock is trading at a meaningful premium to recent trading prices. This provides an opportunity for BPY unitholders to monetize their positions and take the cash to invest somewhere else.

A special committee of independent directors will commission an independent valuation of the BPY units, which could result in a higher price than the US$16.50 currently offered. If BAM sweetens the deal, investors could get an offer that’s 5-15% higher than US$16.50.

BPY unitholders can wait if they’re patient. Alternatively, they can sell the units on the public market, if they see better places to invest their capital right now, especially if they’re sitting on substantial gains from buying shares last year.

For every one share of BPY you own, you can get 0.4 BAM shares. This option allows you to invest in BAM, BPY’s parent and manager, for the long term.

BAM is much more diversified. Other than real estate assets, it’s invested in infrastructure, renewable power, private equity, and credit assets. Notably, it’s a growth stocks versus BPY that’s used primarily as an income vehicle. Specifically, BAM aims for returns of 12-15% per year in the long run.

For each BPY share you own, you can get 0.66 BPY Class A Cumulative Redeemable Perpetual Preferred Units with a liquidation preference of $25.00 per Unit. This option could be suitable for those who seek income.

Preferred stock provides safer income than common stock. However, the price of preferred shares are sensitive to the changes in interest rates.

I’m a business stock/owner. So, the preferred shares aren’t something I’d consider. I’d rather take the cash to reinvest elsewhere. Thankfully, I’m not retired yet and not in a hurry to replace the income lost from the soon-to-be delisted BPY shares.

If you hold BPY shares in a taxable account, you’ll need to decide the best move. If you want to avoid paying taxes, converting to BAM or BPY preferred shares may be the way to go.

Given their high yields, attractive valuations, and stable cash flows, these three TSX stocks are excellent buys for income-seeking investors.

Put Your Cash to Work: 3 Cheap TSX Stocks (With Dividend Yields of +5%) to Buy Now

Make your money work for you. Earn over 5% dividend yields with these under-$20 stocks.

Real estate investors can beat the 7% inflation by investing in these two high-yielding REITs.

Which Canadian Stocks to Buy Ahead of a 2023 Recession?

Fortis stock may not be cheap, but it looks like a far better bet than bonds or GICs as rates…

1 Top Discounted Growth Stock to Buy in This Market Environment

Consider investing in this Canadian growth stock to invest in a tech company that has remained resilient, despite the challenging…

Are you looking to raise the passive income in your TFSA? Here are three oversold stocks that could easily earn…