Home » Investing » Better Than Tesla: This Canadian EV Stock Is up 1,860% in the Last Year

Tesla (NASDAQ:TSLA) was one of the hottest stocks in 2020. Shares of the EV (electric vehicle) giant soared 700% last year, driven by rising profitability and a record number of vehicle deliveries. Tesla was also included on the S&P 500 Index after the company reported five consecutive quarters of positive net income.

However, after a stellar run in 2020, Tesla stock has lost momentum this year and is down 22% from record highs.

Despite the recent pullback in Tesla stock, investors are worried about its steep valuation. Tesla is trading at a market cap of US$663 billion, indicating a forward price-to-sales multiple of 13.6 and a price-to-earnings ratio of 164. 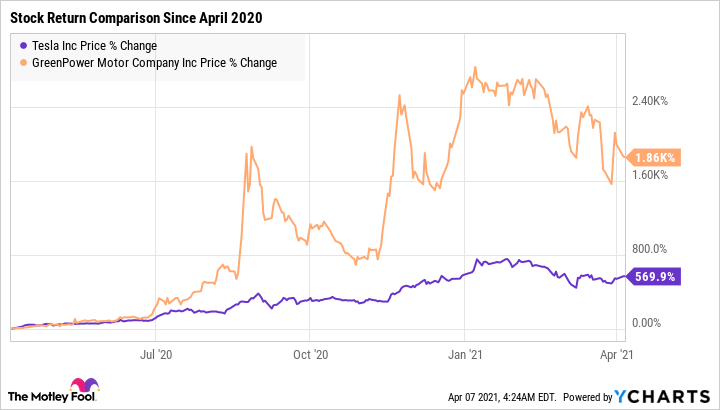 While Tesla continues to lead the global EV market with a share of 18%, this high-growth sector is likely to attract significant competition in the upcoming decade. One of the largest car manufacturers in the world, Volkswagen is fast emerging as Tesla’s strongest competitor with a 6% market share. China already has several EV manufacturers that have gained significant traction in 2020 that include NIO and XPeng.

However, Tesla’s Q1 deliveries more than doubled to 184,800 and the company expects vehicle deliveries to grow at an annual rate of 50% in the foreseeable future. Wedbush analyst Daniel Ives upgraded Tesla to “outperform” earlier this week and raised his price target on the stock to US$1,000 from US$950. Ives suggested that in a bull-case scenario, Tesla shares might more than double from its current trading price to touch US$1,300 in the next 12 months.

Ives expects vehicle deliveries to surpass 850,000 in 2021 significantly higher than the 499,950 figure in 2020. Tesla remains a top bet for several growth investors, but it is unlikely to replicate its staggering returns going forward given the rising competition and its frothy valuation.

Alternatively, there is one Canada-based EV stock that’s just getting started and might be well poised to outpace Tesla in 2021 and beyond.

While Tesla has spent billions in research and development over the years in order to create the (almost) perfect electric car, GreenPower has partnered with multiple third-party manufacturers to assemble its EVs. GreenPower’s asset-light model has allowed it to lower manufacturing and operating costs, and the company is expected to report an adjusted profit by the end of fiscal 2022 ending next March.

GreenPower has in fact just spent a little over $2 million in research and development expenses since 2017, and it uses off-the-shelf components and subsystems to further cut costs. In fiscal 2020, GreenPower’s sales more than doubled to $13.5 million, and the company maintained a gross margin of 30%. In the most recent quarter, its total cash expenditures were $2 million, which suggests quarterly revenue over $6.7 million would help it attain a positive cash flow.

Are you a fan of growth stocks like Tesla?

Before you consider Tesla, you may want to hear this.

Motley Fool Canadian Chief Investment Advisor, Iain Butler, and his Stock Advisor Canada team just revealed what they believe are the 10 best stocks for investors to buy right now... and Tesla wasn't one of them.