The second-quarter earnings season is upon us and more than 130 Canadian public companies will release their quarterly earnings results this week. Such key events sometimes offer good trading opportunities for those closely following the respective companies.

Here are two of the top TSX stocks reporting this week that you may want to watch closely.

Watch out for increased volatility on Teck Resources stock this week

Teck Resources (TSX:TECK.B)(NYSE:TECK) is a major Canadian mining house. It supplies the world market with metallurgical coal, copper, and zinc, and has interests in oil sands through the Fort Hills partnership.

Teck stock has generally been very volatile. Investors may experience elevated volatility when the company reports its second-quarter (Q2 2021) earnings results before markets open on Tuesday.

Wall Street analysts expect Teck Resources to report positive Q2 earnings per share of 66 cents, up from a $0.28 loss per share made during the same quarter last year. The market expects Teck to report $2.69 billion in second-quarter revenue, showing a strong 56% year-over-year increase from a comparable quarter during 2020.

Most noteworthy, we should take market forecasts with a large block of salt when Teck stock is concerned. The company missed the market’s bullish earnings forecasts in six consecutive results installments since the fourth quarter of 2019.

As noted above, Teck stock has a tendency of swinging wildly after earnings. The most recent ones include an 18% one-day decline after a wide earnings miss in February 2020 and a 7% one-day decline in Teck’s stock price after a narrow miss in October 2020. That said, another wide earnings miss in February this year was strangely followed by a 10% rally in TECK.B stock. 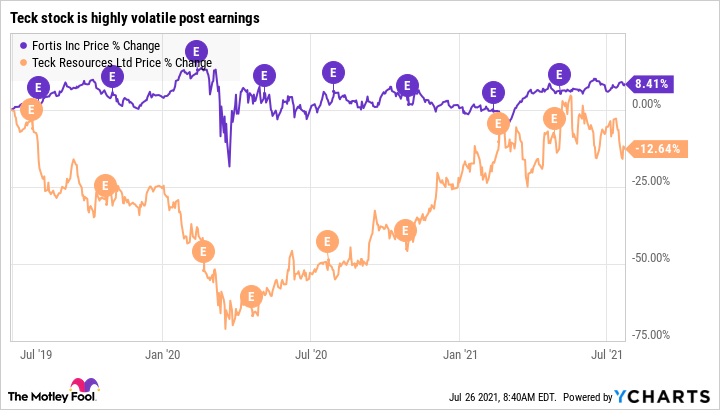 A strong copper price outlook for 2021 and widening margins in steel-making coal support a bullish outlook for Teck. Revenue and cash flows should grow significantly this year.

I would expect a strong rally in Teck.B stock after Tuesday’s earnings if management increases its production and sales outlook for the year.

Fortis stock: What to look forward to in the dividend growth giants upcoming earnings

Utilities giant Fortis (TSX:FTS)(NYSE:FTS) is expected to release its second-quarter earnings before the markets open on Thursday, July 29.

Fortis owns and operates utility transmission and distribution assets in Canada and the United States. It has operations in three Caribbean countries too. About 99% of the company’s cash flows are from regulated business operations.

Naturally, I wouldn’t expect any material surprises in Thursday’s earnings installment. However, Fortis stock price has shown some funny tendencies after earnings lately.

Analysts expect Fortis to report second-quarter GAAP earnings per share of 61 cents compared to 59 cents in the prior year quarter. A Q2 revenue estimate of $2 billion for the company could show a 2,9% year-over-year decline if confirmed.

Fortis’s stock has shown a tendency of falling by more than 2% after an earnings miss, and only rising by far less than 1% within a day after an earnings beat, especially so during the last four consecutive earnings releases.

Given a consensus analyst price target on FTS stock of $57.14 today, shares seem fully valued. An earnings beat may not unlock much upside.

That said, I am writing about a low-volatility stock that is an income investor’s favourite. Fortis has increased its reliable annual common stock dividends for over 47 consecutive years. Its management guides for a 6% average annual dividend growth rate to 2025. The current dividend on Fortis stock yields a respectable 3.6% annually.

I would quickly hover to the company’s cash flow statement and check commentary concerning management’s progress in deploying its $19.6 billion capital investment program.

The funded capital program is key in supporting the company’s expected 6% compound annual growth rate in its rate base from $30.5 billion in 2020 to $40.5 billion by 2025. Revenue and cash flow growth should support planned annual dividend increases.