The TSX has been on a tear this year after a disappointing  2018. And when the markets are up, a lot of stocks are as well. However, investors can strategically choose to buy high-beta stocks during bullish times to cash in on a lot of excitement in the markets.

Beta is a measure of how much a stock swings compared to the market. A beta of one would indicate that it is equal, whereas a beta of less than one would mean a stock doesn’t see the big swings that the market does. A beta of more than one, however, indicates that the swings are deeper than the markets and those stocks could be a bit riskier and could also net bigger returns under bullish conditions.

For that reason, I’m going to focus on a couple of high-beta stocks that could be good buys as we continue to see strong economic conditions.

Suncor Energy Inc (TSX:SU)(NYSE:SU) has a beta of around 1.6 over the past three years, and its swings over the past few years have been noticeably wilder than the TSX’s have been. Year to date, Suncor’s share price has risen by around 20% as it continues to rise right along with the TSX. The blue chip stock is one of the safest investments you can make, even if it has some big swings in the short term. However, with the markets being very strong right now and oil prices also showing a lot of momentum, there’s a lot that’s going right that makes Suncor a very appealing buy today.

Investors might be surprised to know that Suncor is actually running a much better, tighter operation than it was back in 2013 when the oil and gas industry was still at its peak. Gross margins of 48% this past year are much stronger than the 44% that the company averaged back then. Operating margin of 17% is also very comparable to 2013 and much better than 2014’s rate of 13%.

Suncor is a good stock to hold onto during these bullish conditions as the stock still has a lot of upside left and is far from its 52-week high of more than $55.

Lithium Americas Corp (TSX:LAC)(NYSE:LAC) is a riskier option than Suncor, but it also has the potential for much more significant returns. Over the past year, it’s easy to see the volatility from the chart below: 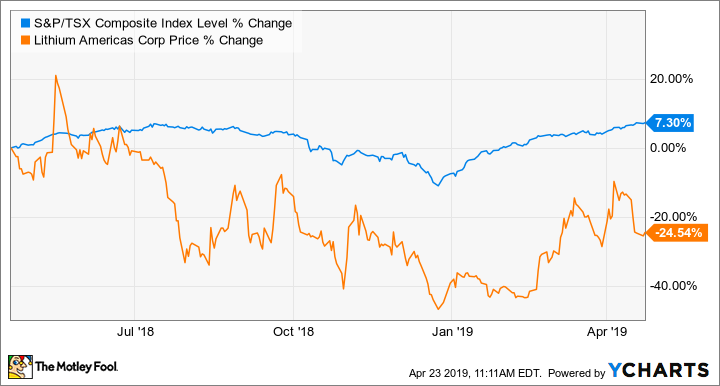 While Lithium Americas has outperformed the market in the past 12 months, in 2019 it has had the edge, as it has risen by more than 22%. The stock has a lot of good, long-term potential, as the demand for lithium is only expected to get stronger in the years to come.

And while that will mean prices will decline, it will also create many opportunities for the company. While still in its early stages, Lithium Americas could turn out to be a very good play. As tech stocks and electric vehicles gain in popularity, which usually happens during a strong bull market, Lithium Americas should see similar bullishness, which is what we’ve seen with the stock averaging a three-year beta of 2.44.

If you’re not risk-averse, then this could be a great option to own for both the short and long term.

Amazon CEO Jeff Bezos recently warned investors that “Amazon will be disrupted one day” and eventually "will go bankrupt."

But Bezos isn’t just cashing out, he’s reinvesting his money into a company utilizing a fast-emerging technology that he believes will “improve every business.”

In fact, this tech opportunity could be bigger than bigger than Amazon, Tesla, and Berkshire Hathaway combined.