Investors have had a month to digest the most recent quarterly results from Canada’s Big Five banks. It was a season in which historical performance did not yield typical results. The usual best-in-class underperformed, and those that have struggled over the past couple of years came out on top. Is the tide turning?

In years past, there was a prevailing theory that if you bought the worst-performing bank, it would outperform in the following year. Data over the past 25 years supported the trading strategy, as it yielded annual returns in the high teens through 2017. In 2018, however, the strategy didn’t pan out. The winners from years past continued to shine, and the losers once again underperformed.

It is a trend that has continued throughout most of 2019. Despite an earnings season that flipped the norm on its head, there are familiar faces at the top and the bottom. This brings me to the best-performing bank of the past decade — Toronto-Dominion Bank (TSX:TD)(NYSE:TD).

Take a look at the chart below: 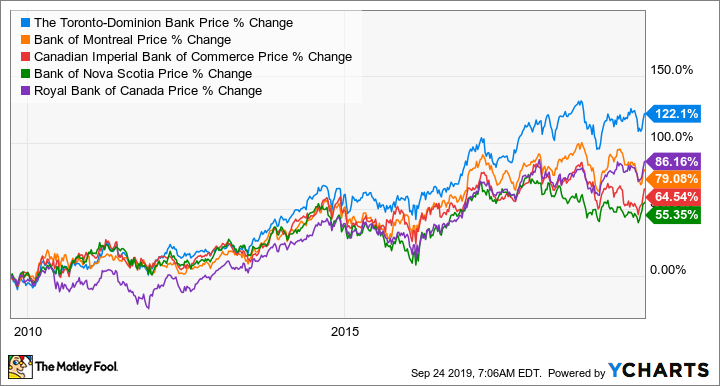 Toronto-Dominion’s performance has been nothing short of staggering. It is the top-performing stock of the past decade, as it has averaged returns of 12.2% annually. Similarly, it has outpeformed over the past five-, two-, and one-year periods.

In 2019, TD Bank has returned 12.7%, second only to the Royal Bank of Canada’s 14.9% return. At the beginning of the year, bears were out in full force against Canada’s top banks. The tide, however, is turning. After lagging the Index for the better part of the year, financials have been the second best-performing sector this past month. For its part, TD had a 13-day streak of positive gains — the longest such streak since 1983.

Not only has TD been a historical outperformer, it is expected to be one of the best-performing banks of the next five years.

One of the main reasons for TD Bank’s status as Canada’s top banking stock is that it has been the fastest-growing bank. Over the past five years, it has grown earnings by a compound annual growth rate of 9.23% — 138 basis points more than Royal Bank’s 7.85% average. As a result, TD is nipping on Royal’s heals for the title of the biggest bank in Canada. Based on forward estimates, it won’t be long before TD Bank takes over the mantle.

Over the next five years, TD Bank is expected to grow earnings by an average of 6.22% annually. This is tops among the Big Five and, once again, more than a full percentage point (1.17%) more than its closest competitor. For its part, RBC is only expected to grow at an annual rate of 4.59%, which leaves the door open for TD to leapfrog Royal Bank in the coming years.

As of writing, Toronto-Dominion is trading at a 12% discount to its historical price-to-earnings (P/E) average and is a clear sign of undervaluation. The banks have historically traded in line with their P/E averages. Based on next year’s earnings, TD’s stock should be trading closer to $95 per share, which implies 24% upside from today’s price.

If that weren’t enough, the bank also sports the highest dividend-growth rate among the Big Five. It has grown dividends by an average of 10% over the past five years, which far exceeds that of its peers. At 41.80, TD Bank also has the lowest payout ratio based on forward earnings. As such, you can expect the company to out-grow its dividend once again next year.

There has been no bank as reliable as Toronto-Dominion. Even though historical performance is not an indicator of future success, it is best positioned for future success. As such, its strong performance will continue. Combined with current valuation and a robust dividend-growth rate, TD bank remains Canada’s top banking stock.