For what seemed like the longest time, Manulife (TSX:MFC)(NYSE:MFC) stock had underperformed its more rewarding rival, Sun Life. However, that seems to have changed, as MFC stock’s price appreciation beat SLF by a nose year to date. 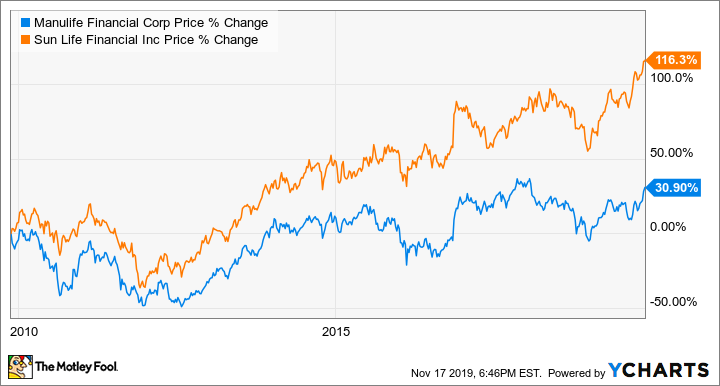 Unlike SLF stock, however, MFC still has a long way to go to get back to its prerecession levels. First, it needs to break above its five-year high of roughly $27.50 per share.

Manulife stock still has humongous upside, as it trades at a ridiculous discount from Sun Life while offering greater earnings growth prospects.

At about $26.30 per share at writing, MFC trades at about nine times earnings, while it’s estimated to increase its earnings per share by roughly 11% per year over the next three to five years. In other words, MFC stock trades at a PEG ratio of less than 0.82. That’s ridiculously cheap!

In comparison, at about $61.20 per share, SLF trades at about 12 times earnings, while it’s estimated to increase its earnings per share by roughly 7% per year over the next three to five years. In other words, SLF stock trades at a PEG ratio of 1.7.

Manulife is improving and growing

Manulife reported its third-quarter results earlier this month. Its core earnings remained stable at $1.5 billion against Q3 2018. The core return on equity was strong at 13%.

Furthermore, as part of its portfolio optimization strategy, it renegotiated reinsurance agreements in Canada that led to a capital benefit of about $120 million.

Cumulatively, this strategy has resulted in a capital benefit of $3.9 billion so far, with the company expecting to free up $5 billion of capital by 2022.

The life and health insurer has also been expanding and enhancing its global distribution capabilities. Investors can expect more growth coming from Asia, as Manulife partnered with mainland China and Vietnam for the long term.

Currently, MFC stock offers a yield of 3.8%. It has increased its dividend every year since 2014 at almost 12% per year on average! The dividend safety is high, as the company is only paying out about a third of its earnings for the dividend. Along with double-digit earnings growth, shareholders can expect double-digit dividend growth as well!

Manulife stock trades at a 25% discount from Sun Life. Should Manulife’s earnings per share grow at an 11% growth rate and the stock expands to a fair price-to-earnings multiple of 12, in five years, the stock would double from current levels!

In the meantime, shareholders will receive a well-covered decent dividend that will add returns of about 4% per year! In summary, Manulife stock can deliver total returns of more than 20% per year over the next five years, essentially returning about 2.5 times an investment today with price appreciation and dividends, barring a market-wide crash.