Contributing to the registered retirement savings plan (RRSP) is an excellent way to save the nest egg for your retirement. Withdrawals from an RRSP account (or RRSP turned RRIF) are taxed as ordinary income and taxed at your marginal tax rate. Canadians will therefore tend to keep their money in there for it to grow.

When you withdraw from the RRSP turned RRIF account, there’s a minimum amount you must withdraw every year based on your age.

Because RRSP/RRIF withdrawals are taxed as ordinary income, investors would want to aim for the highest returns in their accounts.

Alternatively, to make it simpler for the eventual minimum withdrawals, investors might eventually shift to investments that produce the income needed to be withdrawn every year.

Remember that you’ll also have the option to withdraw in-kind, such as transferring stocks out of your RRIF as shares to your TFSA or taxable accounts, if you don’t need all of the withdrawal amounts in cash.

Brookfield Property Partners L.P. (TSX:BPY.UN)(NASDAQ:BPY) is a steal right now! It trades at about a third of its book value! 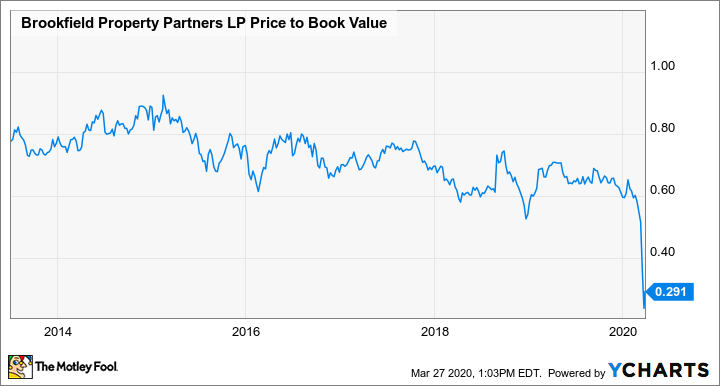 The stock has never traded this cheaply! Well, when we got close to an apocalyptic scenario in 2008/2009 during the last financial crisis, BPY was still a part of Brookfield Asset Management. So, we can’t know how the stock would have fared. Management did point out, though, that during 2008/2009, BPY had no major issues with its portfolio.

Brookfield Property has ample liquidity (roughly US$6 billion) to weather this downturn. Moreover, it’s buying back shares at these super cheap levels, which will allow it to reduce the amount of dividends it pays out.

For easy comparison, it paid out US$1.28 billion of dividends in 2019. BPY therefore has the capacity to maintain its cash distribution that currently yields 14.9% if it wants to.

The coronavirus crisis is weighing on the stock

The coronavirus crisis will undoubtedly impact BPY’s results greatly this year. Its core portfolios of office and retail properties compose 85% of its balance sheet. Particularly, the crisis will impact its new leasing and renewals in its office portfolio.

Closing down large parts of the U.S. economy for at least a few weeks to combat the coronavirus will hit BPY’s retail tenants big time as well. Unfortunately, this is another hit to BPY after a year in which some retailers filed bankruptcy. Thankfully, BPY’s malls are top notch and in prime locations. So, it’s going to survive through this.

Notably, BPY finances most of its portfolio with asset-level, non-recourse debt with an average term to maturity of about four to five years. So, in the worst-case scenario, BPY can just hand over problem assets to its creditors and keep the rest of its portfolio intact.

Why buy BPY in an RRSP

The RRSP is a great place for BPY shares to reside because the tax situation on its cash distributions is more complex than dividends. Its cash distribution can consist of interest income, for example. Currently, you can lock in a yield of close to 15%!

I believe as the economy recovers, BPY can generate extraordinary returns while offering amazing income. If you have a long-term investment horizon of at least three years, you can get great rewards with a BPY investment today.

TFSA Pension: How to Earn an Extra $4,278.75 Per Year in Tax-Free Passive Income

Nutrien Stock Could Soar on This Key Catalyst

Nutrien (TSX:NTR)(NYSE:NTR) is the world’s biggest potash provider and a major supplier of phosphate and nitrogen. To benefit from increasing crop …