The energy sector has been under pressure for a number of years. Oil and gas producers, in general, continue to be in a long-term downward trend.

Despite a strong recovery from the March market crash, TORC Oil and Gas (TSX:TOG) stock is still down 44% from five years ago. Similarly, Whitecap Resources (TSX:WCP) stock has declined by 43%. Perhaps a merger can turn this around and keep the latest rally going.

Due to lower energy prices and the lack of investment interest in the oil and gas industry, it’s somewhat not surprising that there’s M&A action in the energy space.

Several months after the announcement of an all-stock deal worth about $155 million to merge with NAL Resources, Whitecap announces another merger with TORC to combine their resources.

From the March market crash low, Whitecap stock has done better than TORC, partly because the former was able to reduce its share count in a period when the energy stock was trading at dirt-cheap valuations. 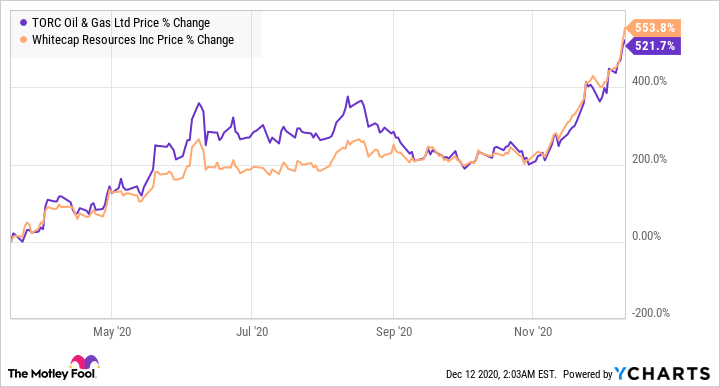 Data by YCharts. A chart showing the price action of WCP and TOG since the March market crash low.

The merger between two energy stocks

It will be an all-stock transaction worth about $971 million, based on TORC’s recent stock price and TORC’s net debt of $335 million that’s expected at the end of the year. TORC shareholders will get 0.57 Whitecap shares for each TORC share they own.

Benefit one: Increased size and scale

The combined company will see an increase in size and scale. Whitecap is more than three times as large as TORC based on market cap and enterprise value.

Importantly, TORC’s asset base fits into Whitecap’s core areas. Together, they will create one of the largest pure-play conventional light oil producers in Canada. As you might know, light oil is a more desirable asset versus something like heavy crude oil.

TORC and NAL are reducing their 2021 production by about 12% and 18%, respectively, versus 2020. The lower production translates to a reduced capital program that leads to greater free funds flow generation.

Whitecap estimates the combined entity to produce more than 100,000 barrels of boe/d (78% oil and natural gas liquids) with a decline rate of roughly 17%. It expects to generate free funds flow of approximately $300 million next year.

The enhanced free funds flow will support a dividend increase of 6% (commencing with the March dividend that’s payable in April) with a payout ratio of about 66%, assuming a WTI crude oil price of US$45 per barrel.

The combined entity is expected to benefit from about $6 million lower in interest expense and should be able to reduce net debt by more than $200 million next year, resulting in a pro forma debt-to-EBITDA ratio of 1.8 times.

Notably, the NAL transaction will result in Manulife owning 9.8% of the combined entity after these two mergers. From the closing date of the NAL transaction, Manulife will be free to sell a third (totaling nearly 3.27% of outstanding WCP shares) in 12, 15, and 18 months. If Manulife chooses to sell in a lump sum, it could pressure the stock in a short time.

The mergers appear to be beneficial for Whitecap and TORC shareholders. The existing Whitecap management team will continue to lead the combined business, which is good, because it focuses on driving total returns with modest production growth and returning meaningful cash in the form of dividends to shareholders.

Whitecap and TORC shareholders should continue to hold their shares and consider buying more on meaningful dips.

Two top energy stocks are worth buying on weakness as both could endure a potential oil slump.

Three energy stocks continue to beat the market, despite dropping more than 10% during the sector’s pullback last week due…