Clean energy stocks have been riding on the trend towards zero emissions. The market rally has been on pause recently. And some profit taking is noticeable in green energy stocks that have had nice run-ups.

Will you buy Northland Power on the dip?

Northland Power opens the door for Canadians to invest in a global independent power producer. The utility’s portfolio is primarily in wind, which contributes about 59% of its gross operating capacity. Specifically, offshore wind contributes about 44%.

The company’s focus on offshore wind is set to continue, as about 70% of its capacity under construction uses that technology. In fact, Northland Power sees an acceleration in offshore wind development in the latter half of the decade through 2030.

Over the next five years, it has identified potential investments of $15-20 billion with its partners ($10-14 billion net Northland’s ownership interest). Therefore, the company could double again by 2030.

The dividend stock has performed well after breaking out in late 2019, despite participating in the pandemic market crash in March 2020. The stock just retreated 15% from its high, making it a good place to buy or add to an existing position.

At about $42 per share, Northland Power could appreciate 26% over the next 12 months, according to the average analyst price target. It also pays a monthly dividend that equates to a yield of about 2.8%, which is attractive in a low interest rate environment.

Will you buy this RNG stock for growth?

Xebec Adsorption (TSX:XBC) is a different kind of beast than Northland Power, which provides a regular dividend. Xebec is a more growth-oriented stock. Compare the price action of the two through the graph below that displays the result of an initial investment of $10,000 over the past three years 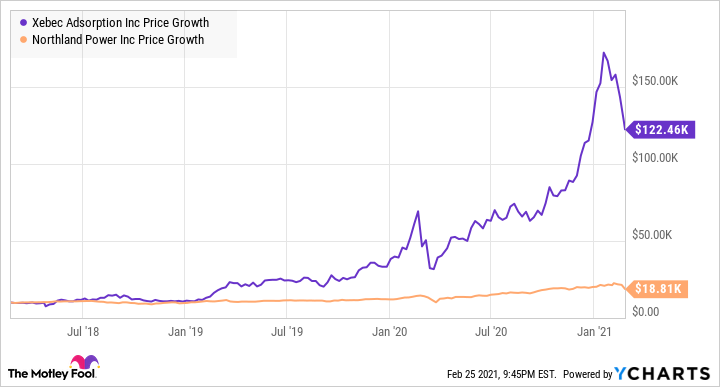 Xebec provides clean energy solutions for the distributed generation of renewable and low-carbon gases. It’s the only company in the world with the technologies to generate both renewable natural gas (RNG) and renewable hydrogen. It has operations in North America, Europe and the Middle East, and Asia.

As the world heads towards net-zero emissions, there will be a continual shift from high-emission fuels, including coal, diesel, and petroleum, to renewable gases.

The end goal of renewable gas generation is renewable hydrogen, which will play a key role in achieving net-zero emissions. Right now, Xebec is the leader in this area, as it produces hydrogen at a lower carbon intensity versus other methods available.

Governments and natural gas utilities like Fortis are the key market growth drivers. For example, Xebec helped Fortis turn landfill gas into RNG that was injected into Fortis’s grid.

The addressable market for hydrogen in 2030 is estimated to be $2.5 trillion. This is a huge market to tap for Xebec whose last 12-month revenue is about $64 million with year-over-year growth of more than 50%.

Xebec stock’s 30% correction from its recent high is a good entry point for growth-seeking investors to start buying shares.

The growth runway for Xebec is long, as countries around the world, including the E.U., Canada, South Korea, Spain, Japan, and Germany aim for net-zero emissions by 2050.

Diversify your investments into other areas of growth here.