Home » Investing » Dividend Stocks » The Perfect Combination of Growth and Income: Why This Tech Stock Is on My Watch List

Canada’s tech industry is small in scale, but it’s home to some incredible top performers. As a result of its small stature, Canadian tech companies get overshadowed by their larger American peers. If you look closely, however, some of Canada’s top tech companies have outperformed their peers south of the border.

One such company is Enghouse Systems (TSX:ENGH). Enghouse is a software company that develops enterprise software solutions for a range of vertical markets.

Enghouse has been a model of consistency. Take a look at the chart below: 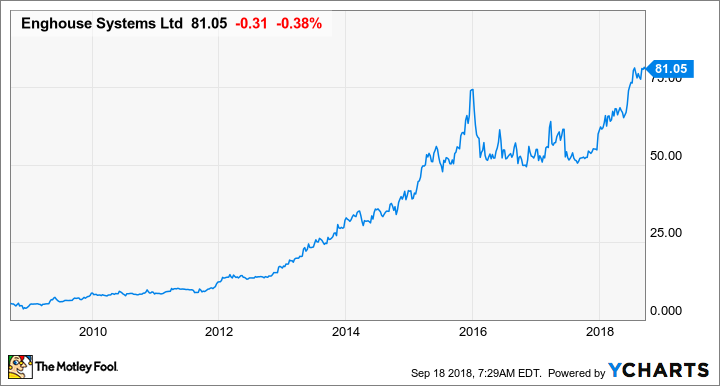 Other than when its price got ahead of itself in late 2015, Enghouse has been a top performer. Year to date, the company has returned 29.5%, far outpacing the TSX’s meek 1.28% gain. Likewise, it tops the TSX Technology Index’s 22.87% return.

Over the past year, the company has returned 55%, outpacing more notable names such as Shopify and Kinaxis. Enghouse has a five-year compound annual growth rate (CAGR) of 44.15% — not bad for a little-known tech company. The best part? Growth is expected to continue.

It certainly appears so based on historical growth rates. Over the past five years, the company has grown revenues by a CAGR of 16%, while earnings per share (EPS) have grown by 20% annually over the same time frame. The company operates in a sector that is experiencing exponential growth. Given the company’s successful track record, I have no doubt it will deliver on expectations.

One of the unique aspects of Enghouse as an investment is its status as a Canadian Dividend Aristocrat. The company is one of only four tech companies to have achieved this esteemed status. Its 11-year streak is also tops in the industry.

Although the company’s 1% yield may not seem impressive, this is due in large part to the company’s share price outperformance. Clearly, this is a good problem to have. Over the past five years, the company has raised dividends by 20.4% on average. This places it among the top 10 companies on the Dividend Aristocrat list.

In comparison to the industry, however, Enghouse is cheap. On average, the tech industry is trading at a whopping 130 times earnings! Analysts have an average one-year price target of $87.80 — 8.3% upside from today’s price.