The market hates this stock. In a year, Transcontinental (TSX:TCL.A) stock has been shaved by more than half. 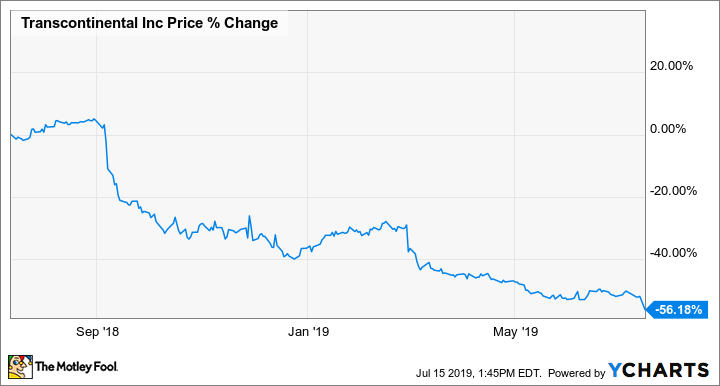 Since 2010, Transcontinental has transformed from a printing and media company to one that is a leader in flexible packaging in North America. Today, it has more than half of its revenues in packaging but remains the largest printer in Canada.

How cheap is the stock and what’s the upside potential?

Compare that valuation to the normal price-to-earnings ratio of 7.5 and price-to-cash flow ratio of 5.4 since Transcontinental began its transformation in 2010. These multiples imply fair-value targets of $18.82 and $23.43, respectively. In other words, the stock is trading at a discount of 29-43% or has upside potential of 41-76%.

Eight analysts have an average near-term target of $22.19 per share on TCL.A stock, which represents a discount of 40% or price appreciation prospects of 66%.

How safe is the dividend?

Transcontinental’s 6.6% yield appears to be secure. It has increased its dividend per share for 17 consecutive years with a five-year dividend growth rate of 7.4%.

Maintaining its dividend-growth streak, the stock increased its quarterly dividend by 4.8% in the first quarter to $0.22 per share. Its payout ratio is estimated to be about 35% of this year’s earnings. For the trailing 12 months, it only paid out about 29% of its free cash flow for the dividend. Both payout ratios give TCL.A a big buffer to protect its dividend.

Transcontinental has an investment-grade S&P credit rating of BBB-. The company’s recent debt-to-equity ratio and debt-to-asset ratios were 1.26 and 0.76, respectively. Technically, the company can pay off its debt in a little over four years if it wanted to. So, the stock is a tad overleveraged.

That said, the company’s debt is under control. Its recent weighted average interest rate was less than 4.3%, which isn’t particularly high. Moreover, management identified that its indebtedness ratio of 2.7 times was on the high end in 2018, and it expects to deleverage in a disciplined manner such that the ratio will be below two times by the end of 2020.

Investors should beware that there’s a whole lot of negative sentiment weighing on TCL.A stock, such that in the near term, it could very well continue to stay down or be dragged down lower. However, that’s also where the opportunity lies — it’s a cheap stock with low expectations from the market. In addition, you get paid to wait as its dividend has good coverage. Contrarian investors will welcome this value opportunity in today’s high market.